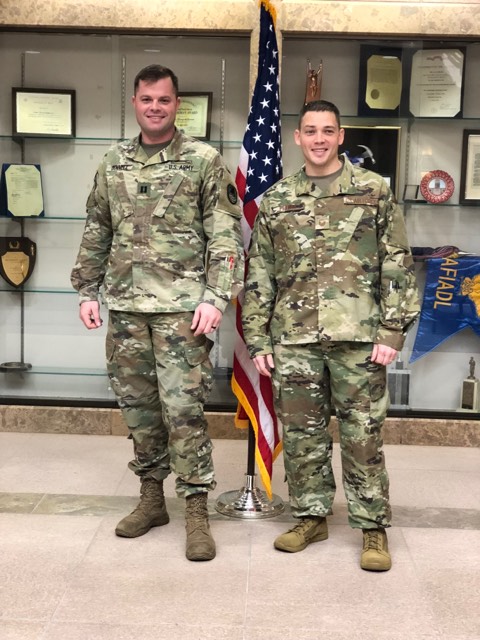 An Atmore native recently helped reenlist his friend for a six-year term in the United States Air Force. U.S. Army Capt. Dexter Donnell swore in Master Sgt. Brian Peters of Flomaton during a ceremony on Friday in Montgomery.

“It was a great feeling of accomplishment to be able to administer the oath of enlistment to someone I grew up with and went to high school with,” Donnell said. “I attended Flomaton High School during my junior year, and played baseball with Brian.”

Donnell said the reenlistment oath was special because this was Peters’ last.

“I was able to administer his last oath of reenlistment because he plans on retiring after 20 years,” he said.

Peters has been in the Air Force for the past 14 years. He was born and raised in Pensacola, Fla., and moved to Flomaton in 1998. He went to Pollard McCall during his junior high school years, and graduated from FHS in 2004. A month later, he joined the Air Force, and was transferred to Lackland Air Force Base in San Antonio, Texas for basic training.

Peters then went to Wichita Falls, Texas afterward. He is a fuels technician by trade, but in Montgomery, where he’s presently based, he is a professional military education instructor at the Barnes Center for Enlisted Education at Air University on Maxwell Air Force Base.

Peters was deployed to Al Udeid Air Base in Qatar, Soto Cano Air Base in Honduras, Incirlik Air Base in Turkey and Al Dhafra Air Base in the United Arab Emirates in support of Operation Iraqi Freedom, Operation New Dawn and Operation Enduring Freedom. He’s been a professional military education instructor since April 2015.

For Peters, getting sworn in by his friend was something he aimed to complete.

“It’s always something I‘ve wanted to do,” Peters said. “It’s awesome to have one of your friends from childhood who is a military brother to reenlist you. It’s something that probably doesn’t happen very often. It probably wouldn’t have happened if he wasn’t stationed in Huntsville.”

Donnell was born and raised in Atmore. He graduated from Escambia County High School in 2004. He enlisted in the Army in 2009 as a Cannon Crewmember and attended Basic Training in Fort Knox, KY. After basic training he was assigned to Fort Lewis, WA from 2010 to 2012 and deployed in support of Operation Iraqi Freedom from 2011 to 2012.  In May of 2012 he was selected for the highly competitive US Army Green to Gold program which always top enlisted members the opportunity to attend college for two years while completing ROTC and earn a commission as an Officer. He graduated Magna Cum Laude from Troy University in 2014 with a Bachelor of Science in Criminal Justice and commissioned as an Infantry Officer. After completing Infantry Officer Basic Leaders Course in Fort Benning, GA he was assigned to Fort Carson, CO. He served as a Rifle Platoon Leader and Executive Officer in 1st Battalion 41st Infantry Regiment from 2015-2017.  Captain Donnell was then assigned to Fort Benning, GA where he served as a Company Commander and commanded Easy Company 1st Battalion 19th Infantry Regiment from 2017-2018. After command he applied for the highly sought-after Functional Area Space Operations and was one of 10 Officers selected from 340 Officers that applied. At present, he is a Space Operations Officer, and works at the Space Missile Defense Command in Huntsville. Donnell contributes his success in the Army to his wife Candius who has supported and stood by his side from the beginning.

Donnell said he joined the military because he knew then that it would provide a more stable environment for his family.

“I was working in construction and had just gotten married, and had a daughter who was 1 years old,” he said. “I went ahead and pursued the military to be able to have a career and provide a more stable environment for my family.”

For Peters, his brother helped him with his decision to joint the Air Force.

“He kind of influenced that decision with the way he talked about how it was,” Peters said. “Living in a small town in Alabama, there wasn’t much I had lined up. I worked at Pizza Hut in Brewton until I joined the military. I didn’t have any aspirations to go to college, but now I have two associate’s degrees.”

Peters said he’s stayed in the military this long because of the benefits the lifestyle can bring to his family.

“For one, this enlistment will take me to 20 years and I’m eligible to retire,” he said. “I have eligibility to pass on the benefits to my kids so their college is paid for.”

Donnell and wife, Candius, have two children, Hydee and Hayden. He is the son of Amanda Moye and Johnny Mothershed.

Peters and wife, Michelle, also have two children, Addison and Cameron. He is the son of James E. Peters of Biloxi, Miss., and Odessa L. Woodcock of Bay Minette.