Rep. Alan Baker is looking for a productive legislative session this year. 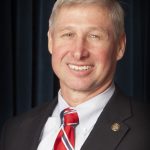 Baker said that one of the biggest items on the table is infrastructure.

“Infrastructure funding is among the biggest,” he said. “That’s in reference to roads, bridges and ports, and has been strongly identified by the governor, legislators – everyone in Montgomery.”

In fact, Gov. Kay Ivey will announce her transportation infrastructure plan today at 11.

And mayors across the state including Brewton Mayor Yank Lovelace have sent support to Goat Hill for the governor’s plans.

Ivey’s plan would raise the gas tax by 12-cents per gallon.

And under the proposed plan, cities would get 1 cent, counties 3 cents and the state would have 8 cents allocated.

Currently, 18 cents per gallon is collected by the state and counties and cities have added individual taxes at the county and city levels.

The last time the state increased its gas tax was in 1992.

Another priority Baker said is continuing to push the Education Trust Fund to pre-recession levels to better equip students and teachers.

“We want to continue to expand on pre-K, make sure rural broadband gets into the areas that need it. All of the public schools now have fiber in them, but some students don’t have access to broadband and that makes it difficult for them to perform some assignments. Of course, we always need for funding for transportation and technology as well as the keeping the divisors for teachers down.”

Baker said prisons are also on top of the list.

“It’s not a sexy issue among Alabama voters,” he said. “But we don’t need the federal government coming in to tell us how to do our job.”

Ivey announced earlier this month that the state would accept bids for three new prisons in the state.

The plan would put 3,000 to 3,500 prisoners in two new facilities and then a third facility would house inmates with special needs.

Preliminary estimates show the cost to the state would be around $900 million.

Baker said there will also be a push to expand mental health in both prisons and throughout the state.

“We are strongly aware that we have to continue to increase dollars,” he said. “And it has to be both in the prison and outside the prison.”

Baker is also working to either sponsor or co-sponsor a number of bills.

“One of which will be a teacher recruitment and retention bill,” he said. “Another will be adding to the rural broadband bill we have already passed. Last year, I served on the Ways and Means Committee and we helped get a rural broadband incentive bill that encourages Internet providers to go into the rural areas. We want to improve on that.”

He also plans to sponsor an apprenticeship workforce bill.

Additionally, he has his eyes on other things such as stronger literacy, a computer science bill and others.