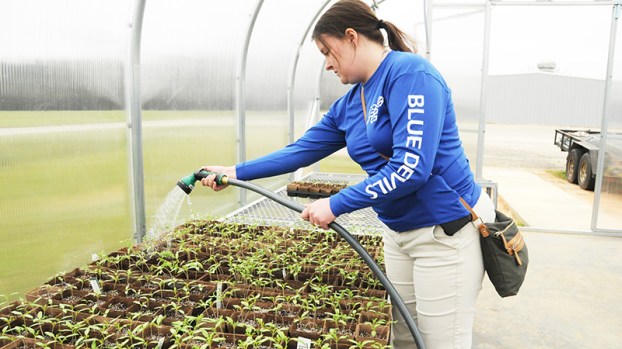 New FFA club at ECHS growing vegetables inside of greenhouse

The students who are participating for a grade in class, are also a part of the school’s new FFA organization. FFA is an intracurricular student organization for those interested in agriculture and leadership, according to FFA’s website.

“It’s a student organization,” Owens said. “They started realizing that agriculture involved a whole lot more than farming. Even though it starts on a farm, there’s a lot more to it.”

Owens was referring to the marketing, managing and transportation elements involved in the agriculture business.

Owens said the club, which began last semester, is going through a learning year.

This year, club dues for members were paid through a Farmer’s Federation grant.

“Everybody that’s in the agrisicence program is an FFA member,” Owens said, adding that his goal is to help make FFA and the agriscience program self-sufficient.

When asked what the main benefit FFA has for the students, Owens said they will learn about people interaction, business, social skills and will gain experiences they’ll never have the opportunity to otherwise.

“It’ll be an experience for them, to see how the whole thing is from farm to table,” he said.

Owens said through the year, each one of the students must complete a project.

“It’s a major grade for them,” he said. “Everyone of the students has within the greenhouse; they’re responsible for 18 cups. They have to water and feed them until we sell them.”

Students and club members are growing peppers, squash and other vegetables.