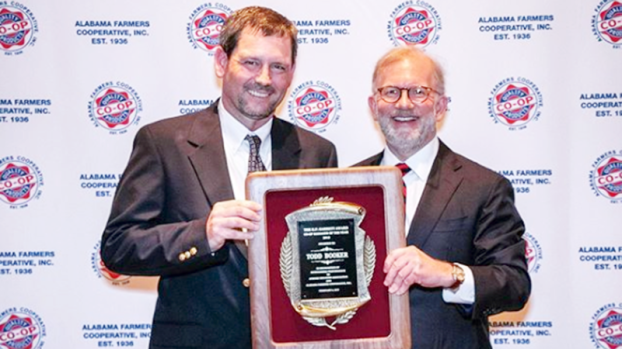 Booker grew up in Huxford, and was raised on a cattle, row crop and hog operation.

“I don’t think I’ll ever forget as a kid, during the summer after a typical south Alabama thunderstorm or on a Sunday afternoon, loading up in the pick up and riding through the pastures checking on cows,” he said. “That’s definitely where my dad started instilling in us the love of the cattle business.”

Booker graduated from Escambia County High School in 1989, and attended then Jefferson Davis Community College for two years before transferring to Auburn University, where he graduated with a degree in animal and dairy science.

His career at Atmore Truckers began on March 16, 1995, in the training program. He was promoted to store manager in 1998, and in 2011, he became the general manager.

Booker was given the award at an AFC meeting on Feb. 6 at the Renaissance Montgomery Hotel and Spa.

“At the meeting, nobody knows who it is,” he said. “When they had it on a big screen, you could tell they were headed south on Interstate 65. After Montgomery, the next thing was the Battle Ship. At the end of the video, they made the announcement.”

What sealed the deal for Booker was seeing Wind Creek Casino and Hotel in Atmore, and also his house in the video.

“It was a surprise for sure,” he said.

Booker said the meeting was made even better because his family was there, including his father, Jimmy; mother, Deanie; older brother, Eddie; his wife, Monica; and their two boys, Travis and Lane.

“When they announced who won it, you got to the stage, and they hand you this plaque,” he said. “Then, my family came out.”

In addition to winning a plaque, Booker won a new Ford F-250.

“They’re headquartered in Decatur,” he said. “They have a mill and hay feed, and all of the miscellaneous stuff, which include garden sprays, and things for animal health, it pretty much all comes rom AFC.”

Booker said the main key in running a business is customer service, and a good support staff.

“There’s no way Atmore Truckers could be the success it is today if it wasn’t for the group of employees we have,” he said.

“There’s no way I could do all that I do without these supportive, dependable people,” he said.

The Ladies of Essence held their annual Mardi Gras parade on March 2 in downtown Atmore. The parade began at... read more