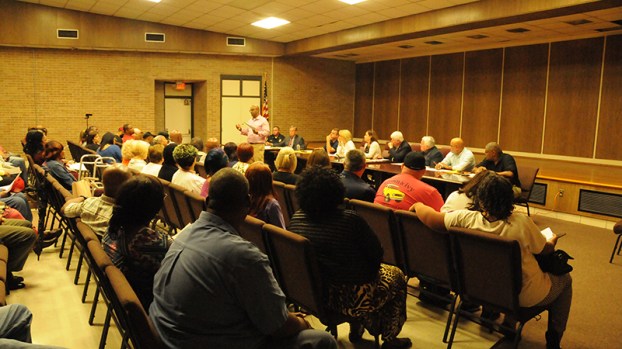 The Atmore City Council approved a resolution to fund a feasibility study for a city school system at its meeting Monday night.

The Atmore Citizens for Change (ACC) coalition and city residents rallied at city hall prior to the council meeting, which had to be moved to the auditorium instead of council chambers because of turnout. According to a release by the ACC on March 10, the purpose of the rally was to ask the city council to vote on the establishment of a city school system. The city council heard from ACC President Loumeek White, Pastor Darryl North, Willie Hawthorne, Michael Arnold and City Attorney Larry Wettermark spoke prior to the council’s final vote on the resolution.

“I’ve heard that we’re trying to start black schools, and we’re trying to hire our own people — I don’t have the authority to hire anybody,” White said. “I can’t. All I want is what’s best for the kids.”

White said there are students going to different schools, namely Escambia Academy, Northview and to Uriah (J.U. Blacksher). Another reason residents are wanting a city school system is because Escambia County High School was placed on the failing schools list by the Alabama Accountability Act of 2015, he said.

“We have smart kids right here in Atmore,” he said. “They’re taking advantage of school choice (and going elsewhere).”

White said parents want to take their kids out of the county schools in Atmore.

“These parents aren’t going to bring their kids back,” he said. “This (a city school system) will only rejuvenate our city. If we start from the bottom, and let you guys (the city council) build a school system, it’ll work.”

“I think we need to talk to our lawyer,” Mayor Jim Staff then said. “Larry could you?”

Smith interjected, saying, “I made a motion and we got a second.”

“Yes, I vote for city schools,” Webster then said.

Councilmen Chris Walker voted in favor, and Webb Nall against.

Smith then voted in favor of the resolution after giving a statement of support. She said this is about doing the right thing, and looking out for those who are going to come behind her.

“I believe we have excellent teachers and principals,” she said. “However, that’s not enough. We will continue to be held back because we’re always outvoted when it comes to us, the citizens of Atmore. We have two board members that voted with us, and what happened, we voted her out.”

She said the school AYP accountability reports since 2012 have been slow to nil.

Smith said many of the students that leave our school system that cross state lines are forced to be untruthful about where they reside to be able to be there.

“This is unacceptable,” she said. “I don’t care who you are.”

Smith also noted that with a city school system, children in Atmore wouldn’t have to leave the school system so they can play in other schools and bring home state football championships.

“They can bring them home right here,” she said.

Councilman Chris Harrison said he wasn’t sure about the legality of the motion at hand.

“And being the city has a strong mayor and weak council, in order for him to make a vote and on my conscious to make it legal, I’m going to have to abstain from the vote,” he said. “I don’t know if it’s legal or not because I thought all votes are extended through the mayor.”

Hawthorne then spoke about the declining population of students in Atmore schools.

“Then, we have an elementary school (A.C. Moore Elementary) that closed down,” he said. “I asked why the elementary school closed down? I was told not enough kids went there, and the revenue was off the chain. They closed it down and put the children somewhere else. Then I got to wondering, if we started declining and going down hill, are we going to get to the point where the high school is going to close down as well? It’s something to think about.”

According to Advance archives, the consideration for the consolidation included the age of the A.C. Moore building and maintenance of schools, availability of space, drop ward trend of enrollment, safety and security, instructional needs and accountability of success in the classroom, student transition, transportation and stakeholders.

Wettermark then spoke at length about the need to have a feasibility study done to outline what it’s going to take to establish a city school system.

“It’s not a simple decision to make,” he said. “There’s a lot that goes into it. I think it would be wise to follow the foot steps of other systems, and then the city council would have all of the information necessary to make the right decision for your community.”

Wettermark said he would have recommendations for firms to complete the feasibility study by the next city council meeting, which will be held on March 25.

The city council, when called for a vote on moving forward with a feasibility study, voted unanimously in favor.

• approved Smith as a voting delegate at the annual League of Municipalities Meeting;

• approved a proclamation proclaiming May 18, 2019 as Lupus Walk Day for lupus awareness.