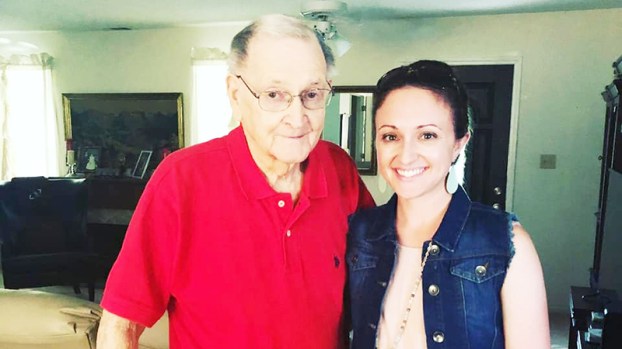 McGill remembered for his kindness, love

Lowell McGill will be remembered for his extensive knowledge and never ending love, family and friends said Monday.

McGill died on March 10 in Atmore, where he was a resident and columnist for many years.

Granddaughter Whitney Maholovich, the daughter of McGill’s oldest son, Steve, said he was quite knowledgeable.

“My granddaddy was one of the only ones of his generation with a college education,” Maholovich said in a telephone interview. “He went to the University of Alabama for a couple years, and graduated from Southern Miss.”

McGill was commissioned as a second lieutenant in the U.S. Army.

“He was very knowledgeable about electronics and computers,” Maholovich said. “He knew more about working a smart TV than I did. He loved writing, loved music. He loved old quartets and ragtime. He loved watching old westerns, and anything with Bob Hope in it.

“In fact, during our Sunday visits with each other — I tried not to go two weeks without seeing him — we’d watch old movies, or listen to old radio stations on YouTube,” she said.

Maholovich said on the occasion they’d watch sports together, McGill would tell her everything about the athletes, no matter who they were.

“I remember if there was ever something I was writing, I would ask him ‘does this sound right and flow right?’” she said. “He loved peanut butter, David’s Catfish and Buster’s Restaurant.”

Maholovich said McGill had a heart for his country, and for others.

“He always made sure you didn’t go hungry,” she said. “He made sure to get something to eat, and sometimes he’d leave and go get McDonald’s hamburgers for us.”

Maholovich said her grandfather was a hard person at times, but he was also a gentle giant.

“The memories I have of my granddaddy with us is something I will never forget,” she said. “We would talk about Jacob (husband) being in the military. My husband had been stationed in some places he had been stationed. One of the most special things was my husband was stationed at Ft. Lee, Va., where my granddaddy attended quartermasters school. My granddaddy knew we were going to Charleston (S.C.) for a week after training.

“He told me to make sure go to Queen Street and try to find 82 Queen,” she said. “It’s a fine steakhouse now. Back in the 1950s, when he first got married, he came and stayed at the bed and breakfast (at 82 Queen). My husband and I celebrated our anniversary at the steakhouse.”

McGill grew up on Perdido, and was a principal at McCullough School. He was an editor of the Tri-City Ledger in Flomaton.

“He’s well educated and a joy to talk with,” Long said. “One time in my Sunday school class (at Brooks Memorial Baptist Church), he came in and sat down and I said, ‘oh my gosh, what do I do?’

“I felt like I don’t need to be doing this with him in there,” he quipped.

“I enjoyed being around him,” he said. “He would bring out and say things that were enjoyable.”

Long said nobody spoke ill of his friend.

“I’ve never heard anyone talk anything bad about Lowell,” he said. “He got a lot of criticism at times in his articles for the paper. He just kept writing them.”

McGill was a longtime columnist for The Atmore Advance. He wrote weekly columns under the “Nostalgic Notes” banner.

Melvin Middleton, a friend who works at the Poarch Creek Recreation Department, said McGill was a family man.

“He was involved in that family through sports,” Middleton said. “He was just always there with them. He really encouraged them to work hard and play hard. That’s the biggest mark of any family and in the raising of his kids. You’d have to give him and his wife a big hand in al l of that.”

Through sports, Middleton said McGill made a big impact on him.

“Through sports, he’s been a great influence on a lot of people being there for his kids,” he said. “That was a big thing. He took a lot of pride in it, and being able to be there and watch them grow as they went through life.”

“He’d love to tell the story that when he was stationed at Fort Benning (Ga.) as a second lieutenant,” Gates said. “His commander found out that he was basically a country boy. Most of the bases’ fire ranges; they’d use goats to keep the grass and the bushes down. Because Lowell was a country boy, the commander put Lowell in charge of the goats. He spent some of his career in the military as a goat tender. I always thought that that was funny, and he did, too.”

The Atmore City Council approved a resolution to fund a feasibility study for a city school system at its meeting... read more