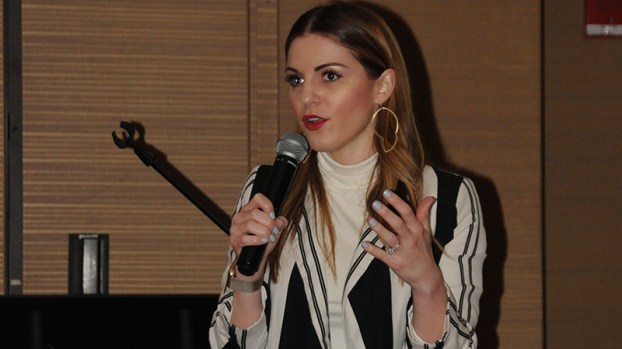 Kristen Hadeed wasn’t afraid to take on a challenge.

The CEO and founder of Student Maid, a cleaning company that’s employed thousands of millennials over the last 10 years, was the keynote speaker at United Bank’s annual 2019 Joint Advisory Board Meeting March 7 at Wind Creek Casino and Hotel.

Hadeed grew up in a home, where her parents fostered creativity and positivity.

She went to the University of Florida, and took a while to figure out what she wanted to major in.

“I changed my major nine times by my sophomore year,” she said. “I had not clue what I wanted to do in life.”

She said life had a different plan for her.

Hadeed said the jeans cost $99, and having no money, she put a cleaning service ad out on Craigslist for $99.

Hadeed quipped that her first cleaning job was a disaster, but she began to earn a good reputation in the Gainesville, Fla. area.

She said at first, the cleaning service was a side business, where she’d clean houses during football games.

“Right before my senior year, I landed a contract to clean hundreds of college apartments,” Hadeed said. “I was excited by the challenge.”

With the challenge came some responsibility as Hadeed said she wondered how does one inspire employees to come to work for a cleaning service.

“I didn’t want to live the rest of my life wondering ‘What if?’” she said.

Hadeed spoke about the early days of Student Maid, and all of the lessons she learned as a leader.

She took what she learned and put them in a book, which she published in 2017, “Permission to Screw Up.” In the book, she tells stories of her biggest mistakes in leadership.

Hadeed said there are four things that are critical to being a leader at a business — empowerment, accountability, authenticity and resilience.

Hadeed said empowering employees means trusting in their capability before they can prove they can handle it.

Accountability is all about having the “tough” conversation, she said.

Hadeed ended her speech with some ecnouragment for all to find their “music.”
“There’s a quote I memorized that really speaks to me,” she said. “It says, ‘Don’t side with your music inside of you.’ I want to encourage you to help people find your music.”

United Bank President and CEO Bob Jones said during the meeting that in 2018, the bank recorded a net income of more than $10 million, which was more than double the 2017 figure.

In regard to economic impact, United Bank’s new market tax credit program helped create $165 million of direct economic impact and created more than 3,000 jobs in 2018. He also spoke about other projects the bank is backing.

Escambia County High School health and science students who are interested in the medical field got an up close and... read more