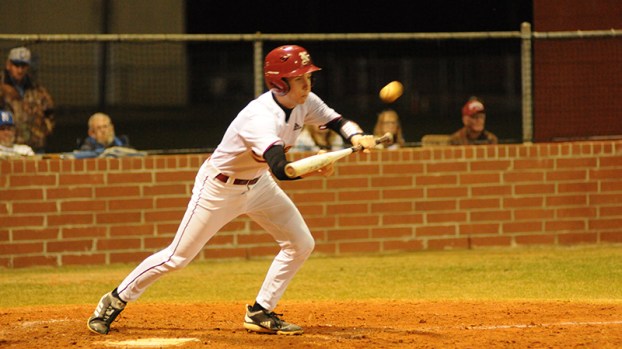 A Northview player bunts during an earlier game this season. | Andrew Garner/Atmore Advance

The Chiefs were led by Nick Venebles, who went 3-for-4 with two singles, a double and an RBI; and Ben Wilson who went 2-for-4 with a single and a double.

The Tigers took a 6-2 lead in the third inning, and NHS bounced back to tie the game in the top of the seventh inning.

In earlier action, Northview needed just over an hour-and-a-half to win its game on March 15.

Tanner Levins pitched a complete game, striking out three and allowing one run on nine hits to help lead the Chiefs to a 2-1 district road victory over Freeport, Fla.

This win caps a sweep over FHS in district play. On March 14, NHS defeated Freeport 10-1.

“Our players are buying into our team philosophy of small ball,” NHS coach Jeremy Greenwell said. “We ask a lot of our players from the bunt game stand point and it has been a key part to our wins this season. Our players are willing and able to sacrifice for the betterment of the team.”

Behind Levins, Northview put together a solid game in the field, only coming one error and stringing together two double plays. According to the Chiefs’ Gamechanger account, their fielding percentage was right at .958.

Ben Wilson led NHS, going 1-for-3 with an RBI; Nick Venable, Taylor Wilson, Seth Killam and Jacob Bryant had one hit each.

Clark, McVay and Johnson had two hits each for Freeport.

During the game March 14, Killam threw a four-hitter in 6.2 innings, striking out 11 and allowing one run.

Greenwell said pitching coach Mike Daniels has been a big asset to the team.

“With coach Daniels’ ability to develop pitchers, it gives us a chance to win every game this season by keeping the opponents’ score down and allowing our small ball philosophy to come into play,” he said. “As long as we can stay healthy, this will continue to be a good year for our baseball program.”