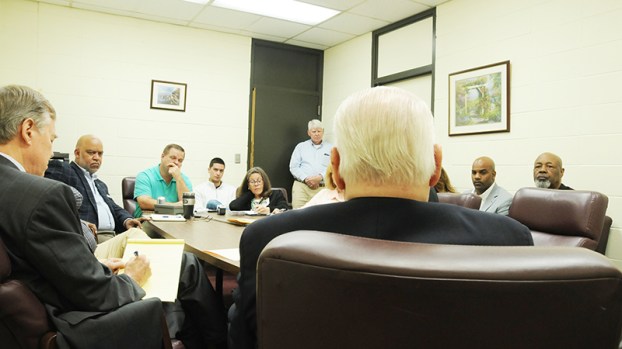 The Atmore City Council adopted a resolution for a feasibility study for a city school system in Atmore during its meeting on March 25.

The vote comes two weeks after the council voted to look into acquiring services for a feasibility to be completed, and four days after a workshop was held where the city council learned what is entailed in the study.

As Staff was adjourning the meeting on March 25, Atmore Citizens for Change President Loumeek White said during the last council meeting, approval from the mayor on forming a city school system didn’t occur.

Staff said the city council will decide on whether or not to establish a city school board once the feasibility study is complete.

Councilwoman Susan Smith then asked does the council have to have a resolution before a study is performed.

“Yes,” Staff said. “When we’re spending money, we have to have a resolution (for the feasibility study).”

Then, Smith asked whether the resolution needed to be submitted to the state board of education.

“So, the resolution will then go to the state?” Smith said.

In a letter from Wettermark to Staff via email, the city attorney said he was told that a comment was made that some sort of communication to or approval by the state board of education was required to begin a feasibility study.

“This is not the case,” he wrote. “This same procedure has been followed by multiple other municipalities in Alabama who first undertook such a study before making a decision whether or not to establish a municipal school system. There is no statute or regulation that requires communication to or approval by the state board of education before the city conducts such a study.”

Wettermark also wrote that should the city council decide that establishing a municipal school system for Atmore is in the best interest of the community, then such a system can be initiated by a resolution of separation adopted by the city council.

During the workshop, Decision Resources LLC President and CEO Dr. Ira Harvey spoke about what the feasibility study includes.

“You have to pass a resolution in the city council by majority vote, ergo you’re a city board of education,” Harvey said, citing Alabama code. “Are you operating as a city schools? No. You’re city board. You have the authority to accept grants, donations, requests, and i.e. The city council or some other group will provide funding for the board until they begin operations.

“At some point after you begin being a city board, we reach a financial separation agreement with the county board of education,” he said. “And only went that divorce settlement — and it is a divorce settlement — is signed, do you receive federal, state, local and governmental revenues.”

Harvey said the study, which is the first step that many city school systems have taken in order to form them, will look at the physical structures of the buildings, a student population count and transportation means, to name a few, adding that the study will be a thorough accounting of the Atmore schools.

Additionally, the study will also indicate what, if any, educational improvements need to be made as well.

“We want to know what a new city board of education could be looking at to do both to change the appearance of the physical structure, what education programs might need to be enhanced and developed and what other ideas that are possible,” Harvey said.

Harvey also provided some insight as to what the board is responsible for, including for the education for every student.

“If the city school system forms, is it ever desirable to let other students to attend who live outside the municipality?” he said. “The board has that legal authority to make those decisions on a rational basis.”

A question was asked about the process of getting Huxford Elementary School as a part of the city school system. HES is located outside of the city limits.

“If there are schools or property outside the city limits you would like to be a part of the municipality, you do it before you pass a resolution to form,” Harvey said. “If you decide to annex down the road, you’ve got to reimburse the county because you’re confiscating the school property.”

At present, Harvey said it looks like Atmore has the physical plants to take care of all the kids who are enrolled.

“No. 2, you have instructional staff already hired for that critical number of students,” he said. “If you separate and at that financial separation those teachers wish to move to other schools in county, or retire, that’s their right. There will be some staff positions turnover.”

Harvey added that no teachers will lose their job as a result of the city school system, if formed.

“That’s why your board needs to time to work to figure out how many kids, plants, staff and other costs are associated with its formation,” he said.

Harvey said at the end of the study, he’ll estimate state and local revenues that are available per student, compared to the county and state.

“I will look at expenditures by function, how much overhead there is in spending, how much you would need to spend, capital outlay and service, and to get an idea of what the resources would be,” he said. “If we have identified significant defects in the physical plant to be upgraded, we’ll estimate the costs associated with that. If we have a discussion of enhancing education, we’ll provide an estimate of the cost for additional units.”

Harvey said the transfer is going to cost money, and money will be needed if the city school board is formed.

• approved a Carnival/Circus sponsored by the Family Life Center to be held April 4-7 behind the old middle school;

• approved the purchase of body cameras for each Atmore police officer. Chief Chuck Brooks said the company, Vigilant, has a five-year contract for $20,000 each year. He said officers will be able to download video content onto a server, and once the cameras are out of date, they’ll all be replaced with new ones.

The passion for RPM Outreach Ministries was evident in Esther McMath’s voice. McMath is the head of the Brewton-area ministry... read more