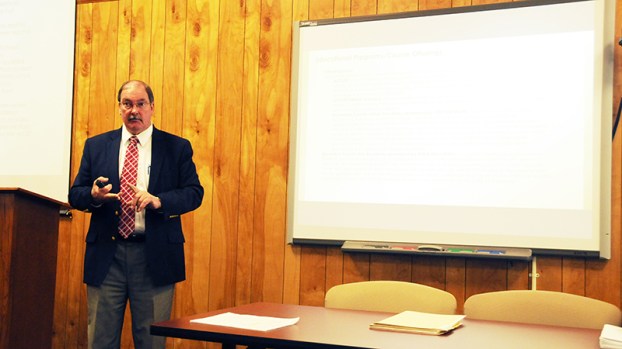 Members of the Escambia County Board of Education, Atmore city officials, school principals and others were present March 20 for a work session held at the BOE office in Atmore, where local schools were highlighted.

The purpose of the session was to give city officials, which included Mayor Jim Staff and Councilmen Webb Nall and Chris Walker, an idea of the state of Atmore schools in the Escambia County School System.

Superintendent John Knott, who spoke at length about the three schools here, was asked following the session whether the session was held in response to the Atmore Citizens for Change’s (ACC) efforts to establish a city school system. The city council approved a resolution Monday for a feasibility study to be completed for the proposed school system.

“This is an effort to tell our story, to be able to actually provide some information to the people that are in the city government and to the public,” Knott said. “This is not a meeting about the city of Atmore, and whether it wants to pursue to look into the city system. They have that right. I respect that right. What we’re here for is to make sure they’re fully informed of what we’re doing, where we’ve started and how far we’ve come.”

A variety of topics were discussed at the work session, including the Alabama Accountability Act, the school report card, school programs and funding, to name a few.

During this school year, Escambia County High School was placed on the failing schools list, according to the Alabama Accountability Act of 2015. To be classified as a failing school, students’ standardized test scores on reading and math falls in the bottom 6th percentile of standardized test scores. The test, the ACT Aspire, is used to measure achievement in the 10th grade. The failing schools report, among others, is one of the reasons why the ACC is looking to establish a city school system.

“The accountability act sounds like a way to help students in areas that are struggling,” Knott said. “It sounded great, but in reality, all it did was pull money out of the schools that need the money to be able to make those improvements and make those resources.”

In regard to the school report card, ECHS improved from a “D” grade to a “C.” By comparison, 39 schools earned Fs on the report card, but only 16 of those are labeled as failing under the AAA, according to an AL.com article.

Additionally, ECMS improved from a “D” grade to a “C,” based on the school’s achievement, growth and absenteeism.

According to the AAA’s accountability data for ECMS, the school earned 52 points for achievement, 89 for growth and 16 for absenteeism for the 2017-18 school year.

For ECHS, the school received 33 points for achievement, 84 for growth, 86 for graduation rate, 57 for college and career and 30 for absenteeism.

Rachel Patterson Elementary received a “C” grade in 2017-18 based on achievement, growth and absenteeism.

“The facts to consider are the report card has more elements than just that one test,” Knott said. “The state developed this report card for multiple measures. Since that report card was out, we’re increasing our academic scores and all of the other areas in that report card.

The Atmore City Council adopted a resolution for a feasibility study for a city school system in Atmore during its... read more