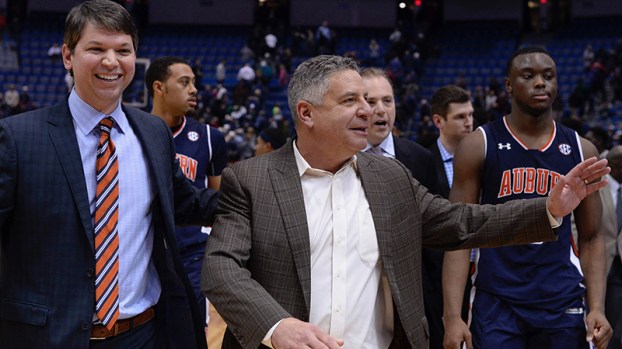 Prewett: I don’t think anybody in that locker room was surprised that we won

“I don’t think anybody in that locker room was surprised that we won.”

That’s what Auburn director of basketball operations Chad Prewett said to describe what it was like after the Tigers defeated top-seeded North Carolina 97-80 Friday in the Sweet 16 of the NCAA Men’s Basketball Tournament.

Prewett, an Atmore native and former basketball coach at Escambia Academy, is with the team as the Tigers will take on Kentucky tomorrow in the Elite 8.

When asked what it was like to get the win Friday against some pretty tall odds against UNC, Prewett said the team’s mindset is that they think they can beat anybody.

“We don’t really look at what everybody else says,” he said.

Forward Chuma Okeke went down with an injury during the second half, and reports today indicate he tore his ACL.

Prewett said it was a big blow for the team, but the boys rallied and played in Okeke’s honor.

At present, Auburn is on an 11-game win streak. The last time the Tigers lost was in a SEC game against Kentucky on Feb. 23, a 80-53 decision.

“You’re talking about what is one of the best teams in the nation each and every year,” he said. “The biggest thing is handling their size.

Prewett added that beating a team like Kentucky, and even UNC is about handling the moment.

“Obviously, playing Kansas was a huge game, and last night against UNC,” he said. “We’ll have to do it again.”

Prewett said the main key for tomorrow’s game is rebounding.

So far, the ride in the NCAA tournament has been what the players are playing for, he said.

“This is what they came to Auburn for,” Prewett said. “This is something they expected, and at the same time, it’s such a wild a crazy ride to be on that stage.”

Members of the Escambia County Board of Education, Atmore city officials, school principals and others were present March 20 for... read more