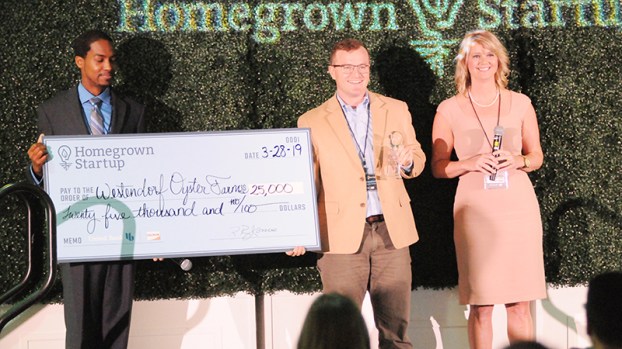 Westendorf — one of 10 finalists who were comprised of startups and entrepreneurs from Alabama and Florida — was picked among more than 50 other applicants to showcase their business plans and applications at the contest.

During the Homegrown Startup Pitchfest event, each finalist had 2 minutes to present their pitch to a panel of judges, followed by three minutes of questions and answers. The judges then selected a $25,000 grand prize winner (Westendorf), as well as a first-place winner who will receive $10,000 and a $5,000 second-place winner.

Westendorf said it was “surreal” to hear his company’s name as the grand prize winner.

“My project has some pretty big dreams behind it, but right now it is operating out of my garage more or less,” Westendorf said. “So to win something like this is very validating.”

Westendorf’s pitch centered around his company providing oyster seeds to companies for harvesting. He said the company will help with the area’s lack of oysters. In fact, the state’s public oyster season was canceled, according to the Alabama Wildlife and Fisheries Division.

Westendorf made his pitch to a room of between 50-100 people. He said he was nervous, and once he got started, it would be fine.

“It was the first time I’ve ever given that pitch to an audience or judges,” he said. “I knew if I could get through a few sentences I would get comfortable and be fine. And that is what happened. I settled in and it all flowed pretty smooth.”

“I think it went great,” United Bank President and CEO Bob Jones said. “It’s really hard to pick through all of the good candidates. I think it’s really good to recognize young people with good ideas and good startups.”

Jones said what put Westendorf over the top was his well defined lpan and potential.

“It was environmentally significant,” he said. “He had an instructive plan that was well developed.”