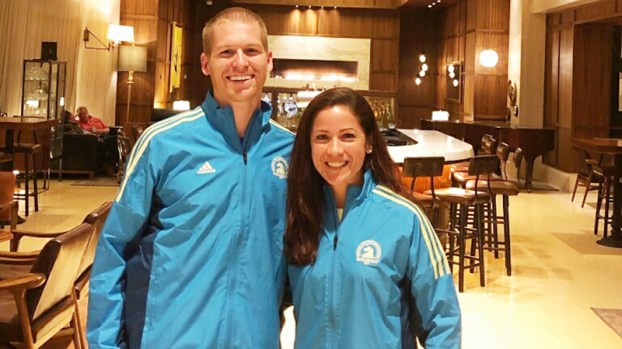 Elia Morales and Alan Ash said their faith played a big part in their completions of the 2019 Boston Marathon on April 15.

Morales said the experience was one of a lifetime.

“It was amazing,” she said in a telephone interview. “I can’t believe how many people, especially in Boston, are involved in that one marathon. In every mile, there were tons and tons of people. You could hear their screaming and support.

“It was so amazing that you forget what mile you’re on,” she said.

Ash said he started out faster than he’d like, and had to make adjustments during the race to hold a steady pace.

“Around mile 10 or 13 I realized I wasn’t going to sustain that pace,” he said. “I drifted off a bit. I reset my goal and focused on trying to be around 2:32. Once you get to miles 16-21, that’s where the major hills are on. There are four major hills between mile 16 and 21, the last they call Heart Break Hill.

“Once I got there, I mostly focused on holding on to my pace,” he said. “I didn’t want to drift off too much. I asked God to give me strength.”

Morales said she made it a priority to focus on her pace during the race, especially when she got to Heart Break Hill.

“Already at 10 miles in, and I was like, ‘oh my gosh, I’m at Heart Break Hill,’” she said. “I just focused on the pace and to not really go crazy. There were people just collapsing in front of me because their legs were cramping because it was too hot. I had the whole of Atmore praying for me with the weather. I was so worried about how cold it was going to be or rainy.”

In regard to the weather, runners experienced a day where temperatures were in the 60s with a little humidity.

Morales said she was thankful the rain and colder weather moved out by race time.

On their finishes, both said they felt good about how they crossed the finish line.

“Then last year, I ended up running the race in 2:36:02, but it was in rain,” he said. “It ended up being my second best finish. I guess getting a little bit older, some people run marathons their whole lives but never get a chance to run in Boston. I’ve been really blessed,” he added. “Of my six Boston Marathons, all of them have been good performances. When I finished this year, I felt blessed and thankful to have the opportunity to race. I’m just thankful for the opportunity to show God’s gifts because this is an important race to be in.”

With Ash’s finish, he already qualified for next year’s race. Morales said she’ll be running in a qualifier in Florida soon.

She said finishing the race was quite satisfying.