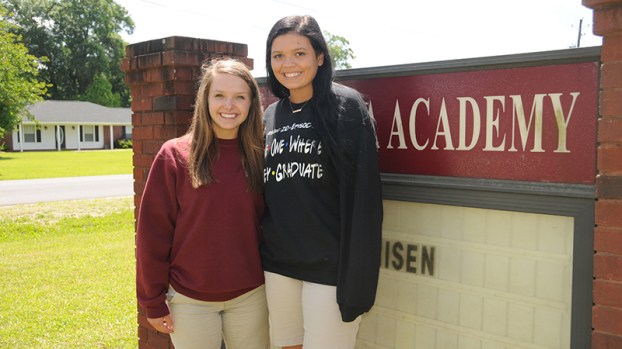 For EA Valedictorian Lexie Hollinger and Salutatorian Sara Rolin, the challenge of working on Sasser’s papers and their work in school have helped them succeed in several ways.

Both said to get to where they are now in their school careers, it took a lot of hard work and studying.

“I studied a lot at night,” Rolin said. “I stayed up late. In English, you have to make sure your English papers are great.”

Added Hollinger: “Anatomy was a hard class. You have to study a lot. The research paper for Mrs. Sasser was hard.”

“She gives you the paper at the beginning of the year, and she specifies everything you have to go,” Rolin said. “(Sasser) gives you deadlines, and her deadlines are firm. If they’re not in by 8 o’clock, it’s a zero every time.”

Hollinger said there’s an outline, bib cards and thesis statements due for the paper.

The topic for Sasser’s paper is always a critical analysis of a British author.

Rolin picked George Orwell, and Hollinger picked William Shakespeare. Both had to draw the names out of a hat.

Both said one of their first research papers was due during volleyball season last fall.

“We studied on the bus a lot,” Rolin said, adding that the seniors had to recite the Middle English version of the Canterbury Tales’ prologue. “We had the Canterbury Tales prologue and we would study on the bus together, and say it out loud because a bunch of seniors all had it. In the car on the way home, our moms would get tired of us saying it.”

Both, who are good friends, said there hasn’t been any sort of rivalry between them in regard to finishing at the top of the class.

“I would’ve been happy if she got val and I got sal,” Hollinger said.

Hollinger and Rolin are a part of several extra curricular activities.

Rolin is the secretary of the Beta Club; a member of the Student Government Association; an Atmore Area Chamber of Commerce ambassador; was a part of Youth Leadership Atmore as a junior; and a member of the Math Team.

When asked why putting in such hard work and staying focused on their grades is important, both said it lead to them getting scholarships to Coastal Alabama Community College.

“Getting this, it pays for our college now,” Hollinger said.

Hollinger said she plans on studying physical therapy and business, and Rolin said she’s going to be studying nursing.