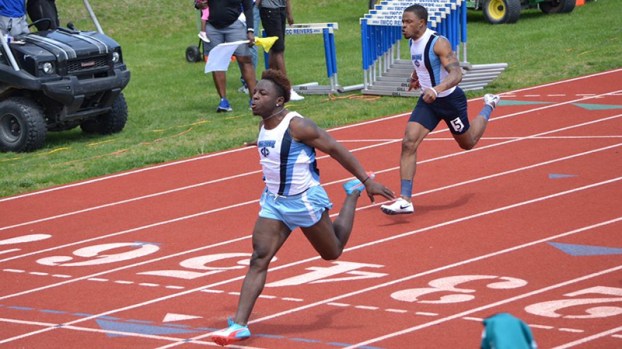 Brown’s running to nationals this week

He’ll be doing more of the same this week at the NJCAA Outdoor Nationals Track and Field Meet in Hobbs, N.M.

Brown, a 2017 Escambia Academy graduate and standout, is a sophomore at Iowa Central Community College, and a freshman on the school’s track and field team.

Brown said when he came to ICCC, he started running track just like he did for the Cougars.

“Iowa Central is one of the best colleges to run track,” he said in a telephone interview today. “Nigel Bigbee and Justin Anderson, my coaches, gave me a chance to prove myself.”

Brown quickly rose through the ranks at ICCC, and became an All-American in his first year.

“Now, in the outdoor season, we’ve been tearing it up,” he said.

Brown did well enough to qualify at the regional meet in Council Bluffs, Iowa, almost two weeks ago, finishing better than eighth place. To advance to nationals, athletes must finish in the top eight.

Brown finished second in the 100-meter dash, running the event in 10.5 seconds. He also qualified in the 4×100-meter relay event.

ICCC will be competing in the preliminaries of the 4×100-meter relay tomorrow. The 100-dash preliminaries are on Friday. Finals will run on Saturday.

When asked what his thoughts are on the meet coming up, Brown noted that running track now is quite different than his high school days.

“Everybody has been training since they were 6 years old,” he said. “Everybody wants a chance.

“Coming into it, I’ve been focused,” he added. “I’ve been hydrating all week. Not many people get a chance from Atmore to have this opportunity. I thank (EA track and field and football Coach (Hugh) Fountain and my dad (Chris).”

Brown said he’s finished with a personal record at every meet, adding that his times keep dropping and dropping.

On hydrating, Brown said he drinks two 20-ounce bottles of water when he wakes up, and then sips from a gallon jug the rest of the day.

Brown said right now, track and field is offering a good amount of success, but when makes the transition to a four-year school, he’ll look to run track and play football.

“I’ve been talking to a couple of schools,” he said. “I’m waiting on getting an offer. I will be going somewhere in the south, though.”

Brown said amidst all of his success, he’s trying to get the good name of Atmore out to others.

“Just getting there (to nationals) was a journey,” he said. “If you worry about qualifying too much, your times will drop. I just want to thank my support group and coach Fountain and my dad, and thank all of Atmore for being with me.”