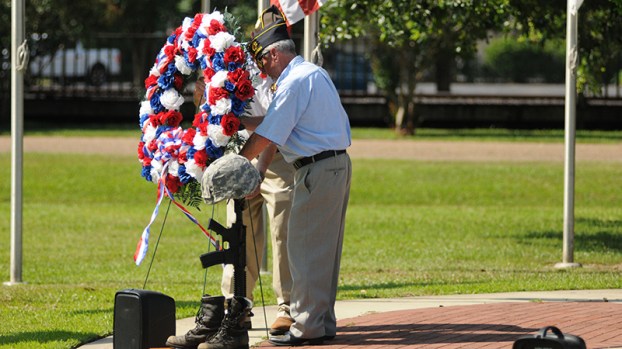 “Today, we honor our fallen, but we embrace the feeling of honor, patriotism and pride.”

The service is presented by the Veterans of Foreign Wars Post No. 7016 and the American Legion Post No. 90.

Hadley, of Atmore, and a resident of Prattville, was commissioned as a quarter master at Jacksonville State University in 2009. She specialized in military education and leadership development.

Through the years, Hadley moved from one unit to another, rising through the ranks.

“I chose my platform to speak to you today based off of my seniors and elders,” she said. “Thank you. You have made me who I am today.”

Hadley spoke about America, and how this country has citizens who chose to serve, fight and die for their country.

“Millions of men and women selflessly answered the call,” she said.

Memorial Day was originally called Decoration Day. It is a day of commemoration for those who have fallen in action while serving in the military.

After Hadley spoke, VFW Commander Billy Gates and American Legion Commander Billy Elder placed the wreath; a memorial roll call was held with the ringing of the bell; the fire team shot a nine-shot salute; and taps was played to honor the fallen.

More than 170 Escambia County veterans gave their lives in the conflict and those men and women were honored Monday in an annual Memorial Day service on the courthouse lawn in Brewton.

The local American Legion and Joe Dozier organize the event each year.

“We are honoring those who have gone on,” Dozier said.

Originally known as Decoration Day, it originated in the years following the Civil War and became an official federal holiday in 1971. Many Americans observe Memorial Day by visiting cemeteries or memorials, holding family gatherings and participating in parades. Unofficially, it marks the beginning of the summer season.

During the event, there was a POW/MIA table and a table set up for shadowboxes of flags given for veterans who have died.

Dozier said it’s his goal to have a larger table at next year’s ceremony.

The crowd gathered sang patriotic tunes and “The Star-Spangled Banner.”

A roll call was given of those who lost their lives in World War I, World War II, Korea, Vietnam and the Global War on Terrorism.

Flags were given to locals in the audience and all were flags that were flown either on Fourth of July or Veterans Day 2018 on the graves.

A moment of silence and “Taps” was played as well.

It was party time for family and friends of the graduates of Escambia County High School during commencement exercises on... read more