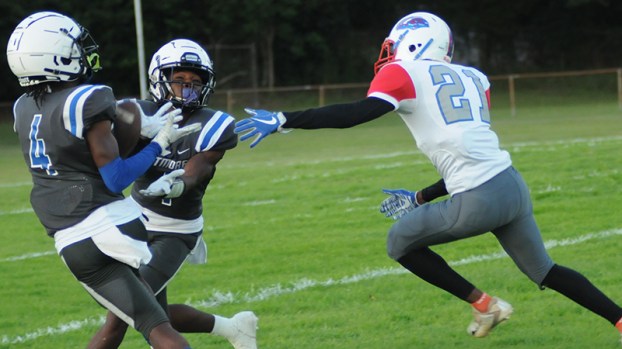 ECHS scored on each of its five possessions in the first half en route to a 34-0 lead at the break, and its first early in the third quarter after a turnover. The Blue Devils’ defense shut down WC’s run game throughout the contest.

“We came out and did what we set out to do,” Mason said. “We moved some pieces, and that’s made the difference. We just had to have an adjustment.

“It worked well,” he said. “Jacob threw the ball well tonight.”
Hammac set up the Blue Devils’ first score with a 47-yard pass to receiver Allen Patterson early in the first quarter. Bradley then took it in from 9 yards, and with Aaron Calvis’ extra point try, the Blue Devils led 7-0.

Less than 3 minutes later, Bradley punched in his second touchdown of the night from 3 yards after Hammac connected with Patterson for a 29-yard pass.

Bradley’s stellar night would soon come to a close a short time later after an altercation between him and Wilcox Central’s Jaylin Jones occurred.

Mason said after the game that Jones pulled Bradley’s helmet off, and his running back retaliated.

“The kid snatched Trae’s (Bradley) helmet off and caught him in the eye with his finger nail,” the coach said. “He caught him under the eye, and blood few. He cut him pretty good. They’d been doing it and I already warned the referees.

“We retaliated and got in trouble,” he said. “Both of them got ejected, but it’s how you respond to that. Our kids have got to learn that a team that doesn’t have anything to lose or they were already behind, they were going to do that.”

“We’ve got to be smarter than that,” he said. “I’m teaching my kids that’s it’s OK to be violent, but we’ve got to have controlled rage. Controlled rage, that’s our moniker. That’s what we go by.”
Bradley will have to sit out a few minutes of next week’s game at home against Monroe County because of the ejection. Additionally, a fine of $300 will be assessed on the school, but through completion of the STAR Sportsmanship Program with the Alabama High School Athletic Association, the fine will be reduced to $100, Mason said.

Other scoring during the contest included: