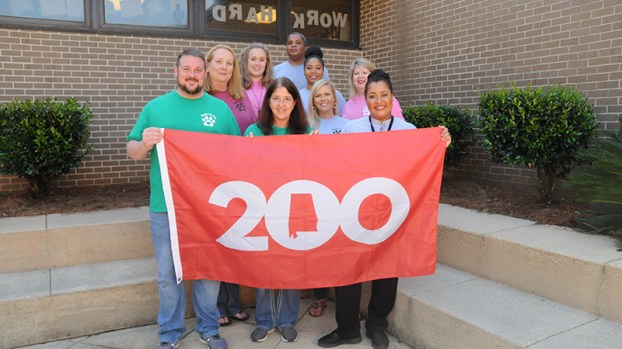 The Atmore school was one of 21 schools given the distinction, which includes an additional $5,000 grant for the school’s Panda for Pets project and a marble commemorative sculpture. A school wide celebration will be held Wed., Sept. 4, at 1:30 p.m.

“The school is ecstatic to know that we’re one of 21 schools selected as a school of excellence,” Principal John Brantley said. “That’s an awesome feeling.”

In August 2018, RPES was selected as one of 200 schools in the state to design a year-long program to help strengthen connections between the schools and their communities.

For some 11 months, RPES completed and recorded several projects after being named a bicentennial school. Each school named was given a $2,000 grant to get the projects going, but had to sustain the project via fundraising. The project’s objective was to increase community awareness about the Atmore-PCI Animal Shelter and the animals wanting to be adopted.

Brantley said they felt they needed to get students involved right away, and every month, they brought some type of item to aid the shelter.

“We created a student Pandas for Pets committee, which consisted of kindergarten through third graders,” he said.

“The doggy treats that were made included all of our kids, and the culinary department at the high school,” Brantley said, adding that community members partnered with RPES as well. “They would come and help us make the treats and work with the kids.”

McDonald said the kids really enjoyed working on the project.

“A lot of our kids don’t have opportunities to bake at home,” McDonald said. “They learned a lot about team work, and how to measure the ingredients for the doggy treats.”

Having a school wide project helped the students and teachers come together to work for one goal, Brantley said.

Due to the fundraising efforts, approximately $4,000 was donated to the animal shelter, McDonald said.

TO SPACE AND BEYOND