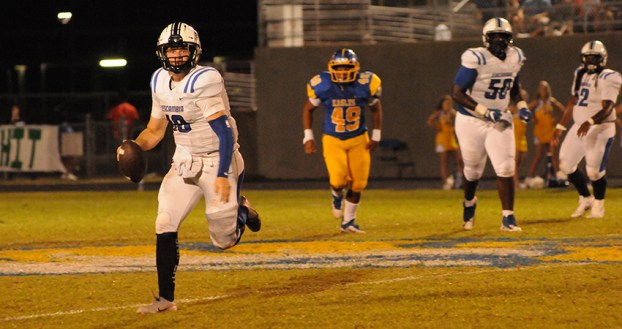 W.S. Neal picked up its first win of the season tonight in a 27-7 region victory over No. 9 Escambia County in East Brewton.

Escambia County drove the field, scoring on its first poession of the game on a 10-yard rush from Jacob Hammac. Aaron Colvis kicked the extra point and the Blue Devils to their first and only lead of the game.

“We did not show up,” Mason said. “We really didn’t show up tonight. They had a good game plan for us. They executed the game plan well. Our kids felt like it was over when we got here.”

“Sometimes you get one or two back that are healthy,” he said. “Sometimes you’ve got to look in the mirror, and you have to persevere through it (the adversity).

“We didn’t change anything,” he said. “We didn’t forget how to do this.”

The Eagles increased their lead with a 9-yard rush from Bonam with 6:40 to go in the third quarter. He added his second score of the night in the fourth on a 36-yard scamper with 9:17 left.

Escambia County couldn’t get much of its high passing offense going, however, it did execute deep runs during the contest.

Mason said there wasn’t anything in particular the Eagles were doing to offer a counter.

“They just got after us,” he said. “They just whipped us. They weren’t doing anything we weren’t expecting.

“Every time we were doing something right, they would give us a penalty,” he said.

Mason referred to a quarterback head bob penalty that was called during the game. He said it’s rarely called these days.

Mason said the Blue Devils dropped four touchdown passes during the contest, and you “can’t have that.”

“It baffles me how we could play so good one week, and not the next,” he said. “It was a lack of effort.”

ECHS was docked 86 yards in penalties. WSN got flagged six times for 45 yards.