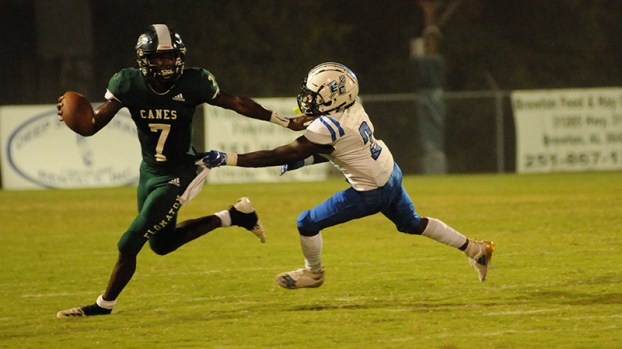 Johnson scored from 7, 5, and 22 yards during the victory.

ECHS put together a strong defensive effort during the first three quarters, holding the top-ranked Class 3A team to 8 points going into the final 12 minutes.

All three of the Hurricanes’ (5-0) scores came after a Blue Devils turnover. Johnson’s second touchdown took place after he grabbed an interception from ECHS senior quarterback Jacob Hammac. Hammac threw four interceptions during the game.

“I think it was total domination from start to finish,” FHS head football coach Doug Vickery said. “Defensively, what a game plan. For our coaches and players to put that game plan in, allowing zero points from that bunch. That’s a great football team, no doubt.

“We imposed our will,” he added. “We do the little things the right way. We started back when we won the state championship, and worked every day. We work 365 days year.  We don’t take any days off. This was the best week of practice that w’eve had since I’ve been here (14 years).”

Johnson finished with 20 carries for 127 yards and three touchdowns. FHS compiled 237 yards on the ground for the game.

Johnson scored his first touchdown on a 7-yard scamper with 5:28 to go in the first quarter. His second occurred almost midway through the fourth on a 5-yard rush with 7:34 left in the contest.

Money sealed the vault shut for the Hurricanes with his last, a 22-yard run around the right end with 2:50 left in the game.

Vickery said he’s aware that the team is ranked, but right now, it doesn’t mean anything.

“We need to be ranked No. 1 at the end of the season,” he said. “This bunch is the best bunch I’ve ever seen as far as being diligent, sticking to the plan, having effort and discipline. We did all those little things tonight.”

Vickery added that he believes the team will be playing for a state title this year.

“I thought it was a total domination against a good 4A team,” he said. “This is the biggest win of our season this year. We’re going to be back at Auburn this year. You can write it down.”

The Blue Devils ran the ball well to start the second half, and had a 19-yard touchdown pass called back for holding.

“We could’t run it up,” ECHS head football coach Scott Mason said. “We were down a running back. We had four down tonight. Two of them we just got them back. It is what it is.

“We ran the ball fairly well,” he said. “We got behind, and we threw it a bit more. You can’t fumble going into the five. You’ve got to take what a good team gives you, and when you don’t capitalize on it, that’s what happens. We basically handed them a gift.”

Mason said that there’s still a process to work through and the team will be ready to go next week for homecoming.