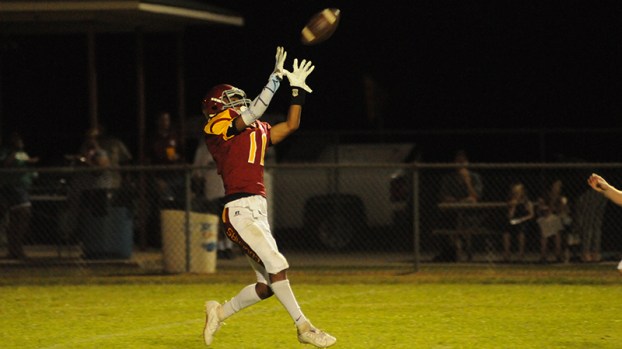 Sims connected with Williams for three touchdowns in the air as the Cougars defeated Hooper Academy 35-14 on homecoming.

Williams caught touchdown receptions from 37, 71 and 24 yards during the victory.

“They made sure there were eight to nine people in the box,” Fountain said. “In the moment, all we could do was throw the ball.

“That’s what made us so successful in the first half,” he said.

Fountain was right as EA led 35-0 at the break.

However, with a successful first half, there were some tumbles along the way.

The Cougars fumbled two punts away, and another on offense.

Fountain said fielding punts haven’t been a problem at all for the team. HA was giving a lot of different types of looks via the punt, he added.

Defensively, EA only allowed some four earned Colts first downs for the game.

In the first quarter, Escambia Academy fullback Jabo Davis rumbled the ball in from 1-yard out with approximately 7 minutes to play, and Orlando Medina added the extra point.

Davis’s touchdown run was set up by Daughtry McGhee’s 12-yard run on third down.

HA’s Paul Menefee scored from 58 yards; and Porter Henry connected with Holden Hollingshead from 30 yards in the fourth quarter.

With the win, EA improves to 4-3 overall, and 3-0 in AISA Class 2A, Region 2. The Cougars will need to win their next region game next week at South Choctaw to clinch a home berth in the playoffs.

All Northview needed was a spark Friday night. The Chiefs got it when down by eight to South Walton and... read more