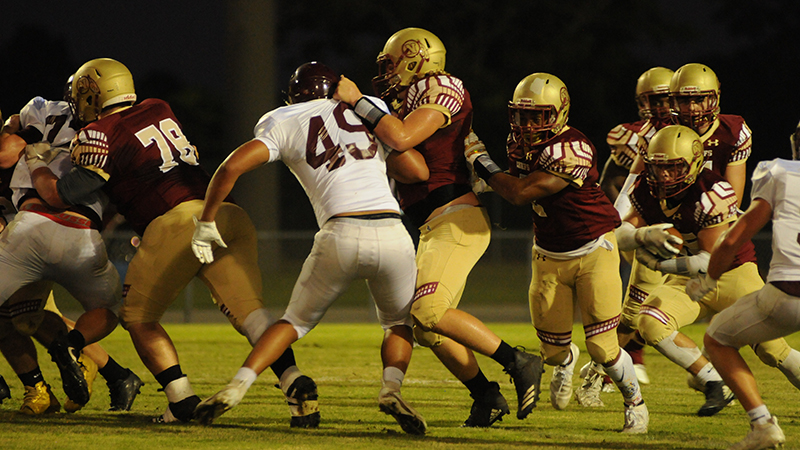 A nightmare for other teams.

All four have helped lead the Chiefs to a 6-2 season so far, and into the playoffs. As of the latest rankings, NHS is No. 8 in FHSAA’s Class 1A, and No. 3 in Region 1.

“It’s a blessing,” Marshman said about having Jackson, Peebles, Durant and Findley. “It’s a blessing for us and a nightmare for other teams on the other side of the ball as well. It’s kind of like a security blanket for game planning. No matter what calls you make, you’re going to be getting the ball in the hands of a good football player.”

Marshman said all four compliment each other in their roles on the team. The coach added that the team has about six or seven high quality running backs that are starters.

“We have seven guys with the talent that can start at every high school,” he said. “We’re really blessed to be deep there. Our offense (run based) makes you share roles. Our offense is dedicated to that, but they also do a great job of embodying that.”

Marshman all three of their jobs, whether it’s running, blocking or faking, are equally important.

Additionally, the Chiefs have Trent Kite, who has rushed 157 yards on 25 carries and scored one touchdown; and Jamarkus Jefferson, who has 132 yards on 13 carries and two touchdowns.

Marshman said each of the four running running backs have added different aspects to their games, including size and strength for Jackson; Peebles working on his downhill running and physicality; Durant adding strength and size; and Findley adding size and bulk.

“They all have things they’ve worked on,” he said. “All compliment each other well.”

Marshman said he’s expecting all four to do good things going forward into the postseason, however, the team’s focus now is on Jay, Fla. this Friday night.

“We’re going to continue to do what we do all season,” the coach said. “We know we’re in the playoffs. Now, we’re playing for seeding. We’re playing for highest seeding possible. We can battle our way into the two seed. All we an control is this week.”

Mashman said the Royals have an explosive offense, and their quarterback, Judd Smith, along with brothers Trent and Kaden Roberson, and Connor Roberts are threats.

Marshman said the team’s excited to be playing close to home at Jay this week, adding that he hopes the winning momentum carries over this Friday night.