U.S. Senate candidate Tommy Tuberville wants to give back to the country that gave him so much. 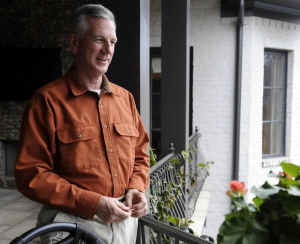 The former Auburn and Cincinnati head football coach is more than six months into his campaign run for a seat in Washington, D.C. He is running as a republican against GOP candidates Stanley Adair, Rep. Bradley Byrne, John Merrill, Arnold Mooney and Roy Moore. The republican primary is March 3, 2020.

Tuberville said he decided to go into politics because he always wanted to serve.

“My dad was career military,” Tuberville sad. “He joined the military and lied about his age at 16. At age 18, he landed in Normandy. He won five bronze stars and a purple heart. He said, until the day he died, ‘I don’t know how I made it through it.’”

Tuberville said his father was wounded during World War II, and when he got out, he stayed in the military. He died while on active duty during a training mission of a heart attack.

Tuberville almost was drafted to serve in Vietnam.

“I got into coaching, and went all the way through 40 years,” he said. “But, I’ve always regretted not giving back because we’ve got a great country. My dad taught me to be a patriot of this country. When I got out (of coaching), I told my wife (Suzanne) I wanted to give back.

“I thought about running for governor, but didn’t do it,” he said. “And when this opportunity came open for a senate position, I looked at it and decided to do it. To me, public service is not a job.”

Tuberville said if elected, he’ll not take any salary. Instead he’s gigot to donate it to the veterans of Alabama on behalf of his dad.

Tuberville spoke about work not getting done in Washington. He said if elected that he’d put himself in a position to be heard.

“If you’re born in this country, you’ve hit the lottery,” he said. “We have a bunch more going for us. You have a chance to be free. I see a lot of things changing.”

On the issue of helping veterans, Tuberville said when they return from battle, all should receive a card that guarantees them the best healthcare.

“A lot of them come back with less than what they went over with — legs, arms, eye sight,” he said. “They come back here and we don’t take care of them. Twenty-two veterans a day commit suicice. They’re not getting the mental help they need. Our VA tries in some degree, but most of them tell you I’m having a tough time getting an appointment. To me, when they fight for us and get back on our soil, they should be given a card that guarantees healthcare that’s better than anybody.”

A big issue in the state is that of the lack of funding for mental health services.

Tuberville said he believes he can help bring federal money to the state to help with this issue.

“That’ll be something I’ll try to address,” he said. “There are things you can try to address to get money funded for veterans, like mental health and drug addiction. We don’t have a plan anymore for mental health. Our plan is to to get them educated and help them as much as we possibly can. Last year, we had $36 billion in medicare fraud. This country lost $36 billion. Can you imaging what this country can do with $36 billion? Somebody is failing us, and if we’re losing $36 billion, somebody is not doing their job, and we’re not doing good enough to keep our eyes off the ball.”

Tuberville said he’s for a boarder wall because the number of drugs entering the United States is huge. He said three fourths of drugs are coming through in open boarders.

Getting the education system in Alabama back on track will be his first priority, if elected, he said.

“The secrete to freedom in this country is education,” Tuberville said. “First and foremost, we have to get our education system going back in the right direction. We have to teach the right things. I’ve seen downgrade of reading, writing and math tools. Getting back to a core curriculum in terms of math, science and reading and writing is very important to me.”