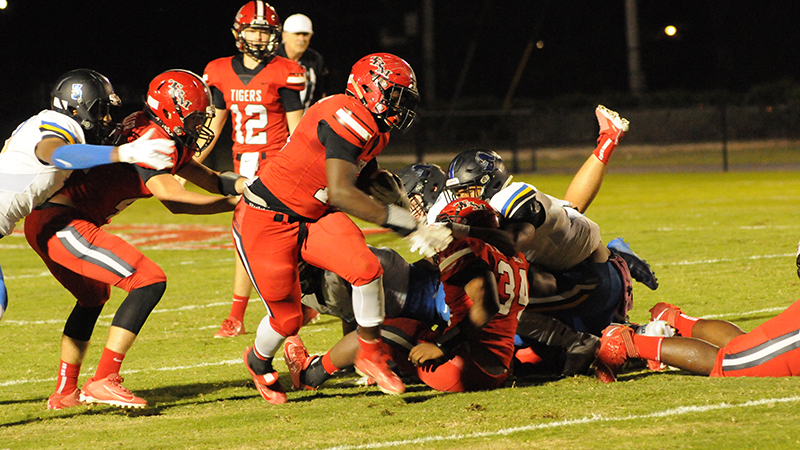 For the ninth time this season, T.R. Miller is traveling for a football game as the Tigers visit Mobile Christian this Friday in the semifinals of the Class 3A state playoffs.

The Tigers (9-4) are 7-1 on the road this season after edging Flomaton 14-12 last week in the quarterfinals. TRM has had to travel during each week of the postseason, and is spotless so far with wins over Pike County and Montgomery Academy during the first two rounds.

TRM started the season 3-0, but lost by one point to Bayside Academy, beat Hillcrest-Evergreen, lost to Mobile Christian, beat Thomasville, took a loss to Catholic Montgomery and Flomaton and beat W.S. Neal during the regular season.

Tigers head football coach Brent Hubbert said the team never thought they were bad at all during the tough stretch of the season.

“We didn’t get a whole lot of breaks,” Hubbert said. “Every game we had lost, Bayside was on the last play of the game, and against Montgomery Catholic, it was late in the fourth quarter. Against Flomaton, it was late. Mobile Christian, who we’re playing this week, they beat us by a couple touchdowns.

“We were coming off a high after beating Hillcrest,” he said.

In each one of the losses during the regular season, except to Mobile Christian, the Tigers have lost by single digits.

Hubbert said his team’s defense and offensive lines have done a great job so far this season.

“They’re pushing people around and doing a good job also,” he said about the offensive line.

A consistent thread for TRM this season includes playing with great effort, the coach said.

“That was something early in the season we played sometimes with,” he said. “We’re playing with a lot of resilient and effort.”

On Mobile Christian this week, which marks the second time TRM has played a region foe this season, Hubbert said it’s tough to keep playing teams that have beaten you.

“They’re also going to be tough in the semifinals,” he said.

Hubbert said the players are excited to still be playing.

“There wasn’t a lot of people who gave them a second thought,” he said. “They’ve done a great job and I’m super proud of them.”

Kick off in Mobile Christian is at 7 p.m. on Friday.