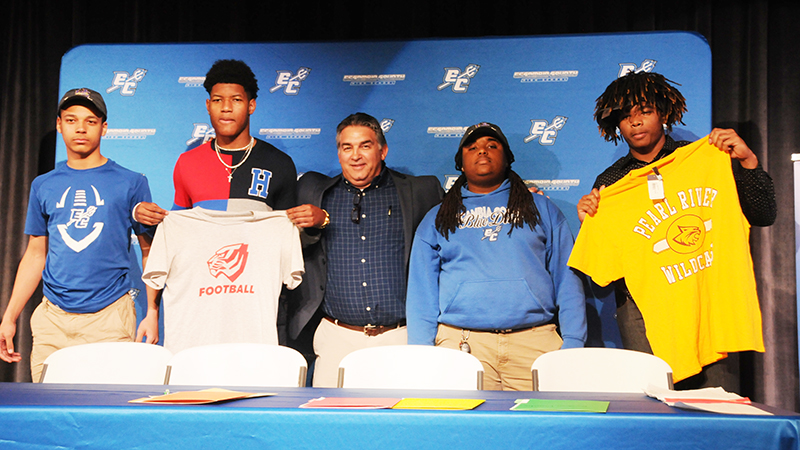 At defensive end, Lambert compiled 41 tackles and 15 tackles for a loss for the Blue Devils.

Lambert said he chose UWA because when he went over the summer for the first time, he liked the campus and coaching staff.

“Then, they invited me to one of their football games at homecoming,” Lambert said. “They seem like they’re great fans, and they show a lot of love for you on social media.”

He said the key to the position is not being scared.

“You’ve got to have a high motor when you’re down in there,” he said. “You’ve got to have speed, foot work and a high confidence.”
Lambert said it felt good to get the signing out of the way because for so long, it was his dream to sign to a college one day.

For Ferguson, he was glad to put ink to paper, making it official.

“It’s been a long process,” Ferguson said. “I’m glad they gave me a chance that I have left to prove.”
Ferguson said he chose the college in North Carolina because it was the only team that was interested in him, and he felt like it was the best place for him to go.

During his senior season, Lewis compiled 56 tackles and 11 tackles for a loss on the gridiron.

Lewis said he had a choice of a few Division 1 schools, but qualifying times didn’t work out. Instead, he chose Pearl River because of the coaches, and their drive and love of the game.

Hammac graduated early, and signed at FU in Montgomery.