The Escambia County Sheriff’s Office is looking for a 33-year-old man who escaped from work release today. 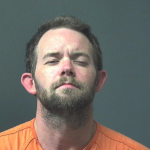 Sheriff Heath Jackson said this morning that Hunter C. Madden, a 6-foot, 185-pound male with brown hair and blue eyes, escaped from work release this morning. He was being held on failure to appear, possession of a forged instrument, attempting to elude and drug paraphernalia charges.

Jackson said in a release that Madden is not considered dangerous.