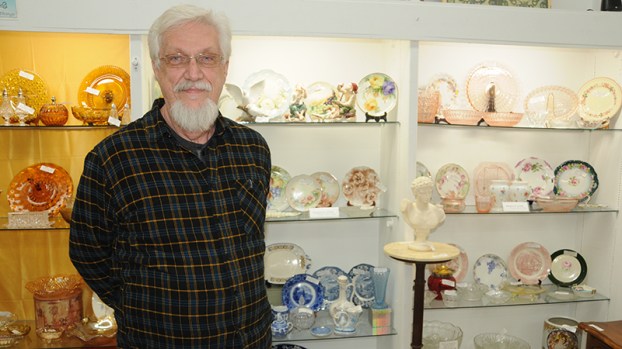 Designs on Living on North Main Street has just about everything.

“In the malls, I specialized in porcelains and glass wares, and vintage kitchen,” Brown said. “That was my interest. I dabbled in other things, but since I moved into the shop (in Atmore), I realized I had to expand into other areas.

“In the malls, there were other people who were specialized in that stuff, and I couldn’t get that there,” he said.

Around Designs on Living, customers can find vintage kitchen ware, furniture pieces, glass ware, porcelain, cookware and other items. He said he has vendor spaces for rent for those who are interested.

Brown said he’s getting more into furniture than he thought, and also into rustic and primitive pieces.

“I’ve always done a little bit of it, but I wanted to do more,” he said.

Brown said everything in the shop is vintage or antique. To be considered vintage, the piece has to be at least 25 years old, he said, adding that antiques have to be 100 years old.

He said he’s been in business for 20 years, and has always been a “junker.”

“It was out of necessity to begin with, and then I realized that I like finding treasures,” he said. “It’s the thrill of the hunt.”

Brown said a lot of his kitchen pieces, for example, are collectibles, but most of them are still usable today.

Brown said family was the big lure to come to Atmore.

“I’ve always been familiar with the town,” he said. “I always thought it was a cool little town. I go to the casino occasionally. I got the opportunity to buy the (former Your Pink Boutique) building, and that’s what got me here.

“I finally bit the bullet,” he added. “At my age, it’s not an ideal time to start a new adventure. This is basically fun to me. I’m in a position that I don’t have to make a killing. I just need to keep the lights on.”

Brown began in retail, and then transitioned into wholesales as a career. His last career was in construction management. He worked as a project estimator and manager for commercial. Additionally, he flipped houses to help bring in extra income.

The name of the business has a special meaning to Brown.

“I flipped houses for a while, and my success was to be able to redesign a house,” he said. “The primary reason for the name was is that 25-30 years ago, I was basically considered terminal. I had a very serious illness.

“Then, I started doing stuff to get me back up after I started regaining my health,” he said. “Designs on Living is partly on designs, and party because… it was something to get me up and going.”