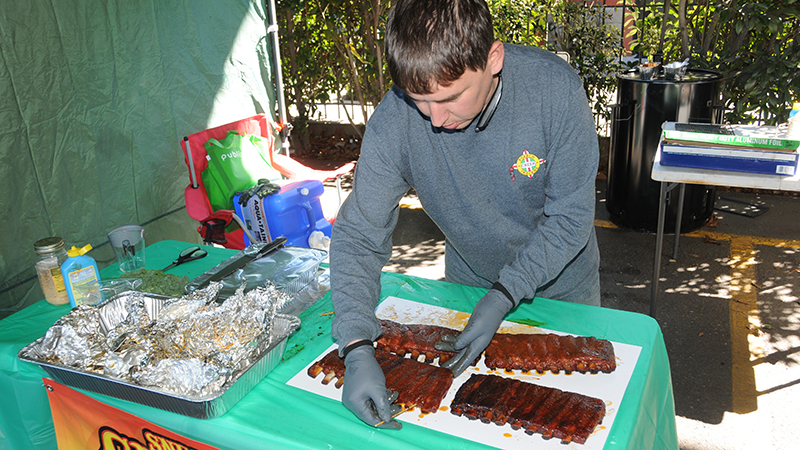 Bartley also competed in the chicken division, and didn’t place.

“I felt like my chicken was a little off, and it shows,” Sneaky Creek Leader Tim Barltey said. “I knew that. On the ribs, I was surprised. I wasn’t super impressed about them. I thought they were good, but I felt my appearance at the end having to rush was going to hurt me. But, apparently it worked out.”

Bartley’s team was one of 20 teams competing in the backyard division. A pro division portion of the tournament was held, where competitors dished out their best chicken, ribs, pork and brisket.

All backyard division teams parked trailers and trucks, along with barrel smokers and grills, at the Union Station Train Shed in downtown Montgomery.

Bartley said the first turn in was for chicken at noon. Ribs were at 12:30 p.m.

To get ready for the Bama-Q competition last weekend, Bartley drove his trailer up the night before and set up his two barrel smokers.

The next day centers around preparing the chicken, normally thighs, and ribs for the smoker. He said he cooks the ribs 2-and-a-half hours on the smoker.

Then, he lets them rest.

Bartley spent some time feeling the flexibility of his ribs before selecting the right two racks for the judges.

Turn in times are quite strict during competitions.

If competitors don’t turn in their entries during a 10-minute window, they’re disqualified, or DQ’d.

Bartley turned in his chicken with plenty of time, and managed to get his ribs in with 2 seconds left on the clock. He ran to make it in time for the ribs turn in.

While each team is competing against each other, they are a family.

Bartley said this is a great venture to be a part of because competitors bring their families to the competitions.

Additionally, he said he’s met so many good, quality people along the way.

Team Sneaky Creek BBQ is a part of the Gulf Coast Pitmasters team, which is based in the southern part of the state and area.

Bartley built team Sneaky Creek in 2015 as a team-building exercise at Wind Creek. The team has won multiple grand championships and many firs tplace finishes in each meat category those far. Additionally, the team has competed at the Jack Daniels World BBQ Championship in Lynchburg, Tenn., and the World Food Championship in Dallas, Texas.