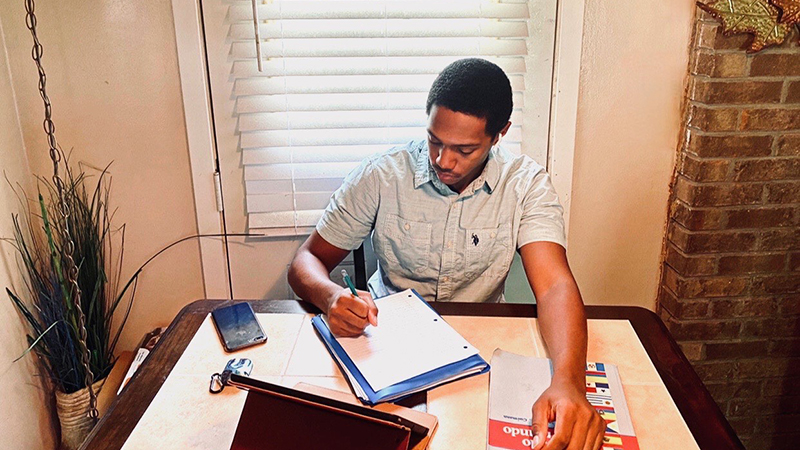 Like every other student in the state, Lillian Bonner and Austin Washington have been finishing our their school year at home because of the COVID-19 pandemic.

Alabama Public Health and Department of Education officials announced March 26 that all public K-12 schools would remain closed for the remainder of the current school year. EA, a part of the Alabama Independent School Association, announced its closure soon afterward. Virtual learning for students began on April 6.

Bonner said when she heard that they couldn’t come back to school to learn, it was conflicting for her.

“It was kind of conflicting honestly,” Bonner said. “I was thinking where would I have time to do personal things as I’m working on my business and such, and I also have to think about the school aspect and not being able to see my teachers or being able to learn in the classroom and being taught to learn.

“It’s been very challenging,” she said.

Washington said he was really enjoying school at the time of its closure.

“I was really enjoying school at that time because we had just started track,” Washington said. “We had a home and away track meet. I was shokcked when I got the news about it. I thought maybe it wasn’t going to be as bad, that maybe this is going to be better to be at home becuae I have a pond at my house.”

Bonner said for her, the learning aspect of doing school at home has been a challenge. For Washington, it’s the distractions at his house that are posing a challenge.

Both said they receive packets with about two weeks worth of work from the school via email.

Given that both are in a new learning routine, they said they’re doing well.

Bonner said her routine involves getting up at the same time as she would if school were still in session.

“I will get up around the same time I have to get up for school around 6:30,” she said. “I’ll do two or three subjects at once for work that day, and then I will go to my barn and do some work there and come back to lunch and do my last two clases. I’m actually finished by 2 o’clock every day.”

Washington said he gets up, thanks God for waking him up and reads his Bible to start the day.

“After I read scripture, I brush my teeth and eat breakfast – I do one class a day so I get my work done for the week,” he said. “The rest of the time is lesiure time. If focused, I can be done around 2-2:30 p.m.”

Bonner and Washington gave some advice to other students who are going through the same routine as them.

Both said to not stress over school and to not procrastinate.

“Procrastinating will get you in the end,” Washington said.

Bonner is the daughter of Kyna McDonald and Gil Bonner, and Washington is the son of Aubrina Bowens and Michael Bowens.