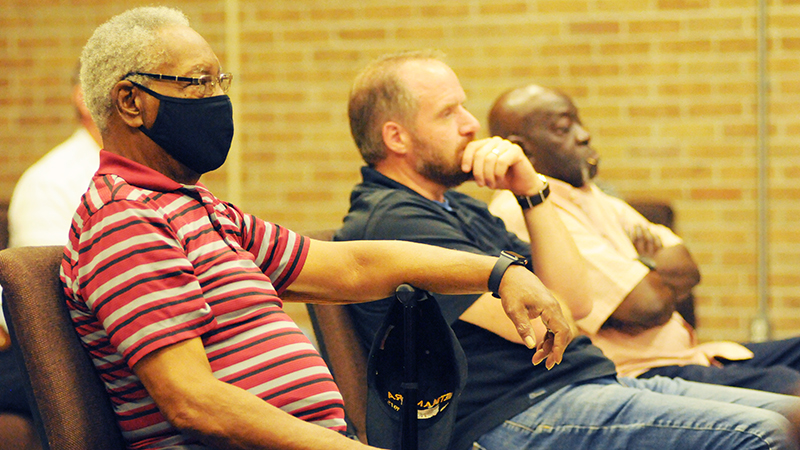 That’s what one of several local and area pastors said Thursday night during a public meeting at city hall in Atmore.
The meeting was held to help open a dialogue between city of Atmore officials and residents.

On May 25, Minnesota police officers knelt on the neck of George Floyd. The action resulted in the man’s death, and has sparked peaceful protests around the country and world.

Since the death of Floyd, the four former MPD officers have been charged with his death.

Atmore Police Chief Chuck Brooks fielded questions from the pastors, and others took the time to speak on the current climate.

“The events that happened in Minnesota recently has basically shocked the law enforcement community,” Brooks said. “I know it’s shocked you.

“I do not condone and I do not accept that behavior,” he said. “What do we do moving forward?”

Brooks said he’s had a long talk with his department.

“Here recently, I have received complaints and I have addressed individually with officers about respect, not only on the African American side, but also on the white side,” he said. “We’re tasked with many things, criminal, civil and different types of situations.

“It’s a tough job that we do,” he said. “My officers know how I feel and I ask every officer I hire to treat others how you’d like to be treated.”

Brooks said the APD is going over its policies constantly, especially on care and control. He said he lobbied early on for body cameras, which have been outfitted on each officer’s uniform.

“On the body cameras, we wanted accountability from the public and from us,” he said.

Brooks urged the local pastors to come by the department and meet the officers that have to do the most dangerous task every night of getting “in that automobile.”

“I just ask you to come to them and get to know them,” he said.

Brooks said he believes in the power of prayer, and that “we need it now more than ever.”

A local pastor asked about leadership during these times.

“As pastors and leaders, we have to talk about reality,” Jones Street Holiness Church Pastor Shawn Williams said. “What are the leaders doing to persuade people to walk right, and talk right?”

“We have been walking past that ‘elephant’ in the room thinking that it’ll get smaller every time you walk past it,” Bishop said. “As Dr. (Martin Luther) King said, ‘Injustice anywhere is a threat to justice everywhere.’”
Since Floyd’s death, the problem of racism in the country and world has risen to the forefront of activism today.

Pastor Harold Askew said the problems the country is facing today is a humane problem.

“This isn’t a black or white problem,” Askew said.

Askew asked Brooks about the most-recent incidents where a man was shot and killed by FBI agents on May 20, and another was detained after an all-day standoff at a residence off of McRae Street.

“They waited,” Askew said, referring to the incident on McRae Street. “Then, another incident was when a man was held in a trailer and he ended up dead.”

Brooks said the incident on McRae Street ended with the man’s surrender after tear gas was used because communicating with him wasn’t successful. He said the FBI didn’t communicate with his department, or the Escambia County Sheriff’s Office about the wanted fugitive that made it to Atmore.

Today, a peaceful march is being held at 9 a.m. starting outside of city hall. The march will go from city hall, down Main Street to Heritage Park.

Over the last couple of weeks, some protests around the country have turned violent.

A pastor asked Brooks if something were to happen to them at their homes, how do they protect themselves if things go sour.

“I hope and pray that not of us have to face that,” Brooks said.

Denbray Archie, a retired pastor of Stockton, asked after all that’s done, what is the reasonable expectation?

“What do we tell the young people,” Archie said. “Because of humanity, it’s not going away.

“This has been the fabric of people for thousands of years,” he said. “We gotta get some person-to-person talk.”
Archie said through talks, “we can assemble to agree that we can disagree.”

Also in attendance was the city council.

Councilwoman Susan Smith said she receives calls from kids all the time asking one question.

“They say, ‘If I leave home and if I get stopped, will I make it back home?’” she said.

First United Methodist Church Pastor Andy Gartman said it’s crucial that an open dialogue be formed.
“We’re going to hear things we don’t want to hear (as white people),” Gartman said. “As white people, we can do this.”

Gartman referenced to a book that he and several of his colleagues just finished up, called “White Fragility.”
Gartman said the book was written for white people to read.

He said the book details the institution and framework of racism.

The question of using necessary force and what that means came up during the meeting.
“We use necessary force, but that doesn’t mean putting a knee on somebody’s neck,” Brooks said. “An officer wears many hats.”
Other comments from pastors included:

Sheriff Heath Jackson, known by many to be fair to all, said a plan must be formed.

“We gotta make a plan and decide how to do it,” Jackson said. “Everybody has got a power.”