March was peaceful, meant a lot to city 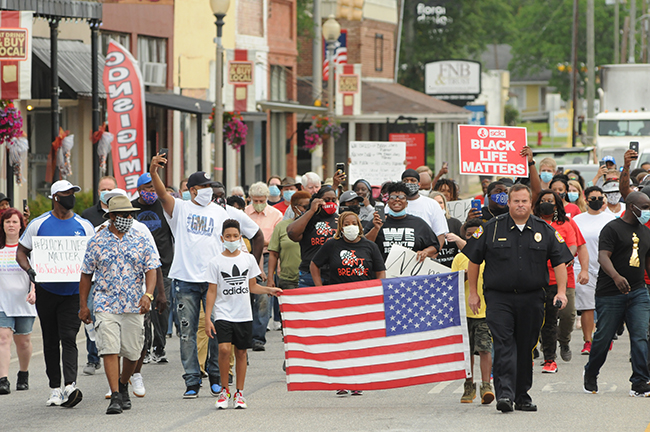 Marching as one, a group of area and local residents made their way down Main Street Saturday.

As we were documenting the peaceful march, we got goose bumps because of the significance of the event.

On May 25, George Floyd died after being detained by police officers from the Minneapolis Police Department.

Since then, Floyd’s death has prompted several peaceful, and some violent, protests around the country and even the world.

Although Floyd’s death was tragic and unnecessary, the country’s mindset of racial inequality is changing, and the march on Saturday, in our opinion, is helping the change.

Once the march concluded at Heritage Park, all were asked to stand in a big circle, together.

Some event organizers spoke, and other city dignitaries said what was on their minds and hearts.

City Councilmember Jerome Webster was passionate in his prose to the attentive crowd. That also gave us goose bumps of excitement.

There have been a few people who have asked about how the march went.

Our response has been that it went well and was peaceful in nature – and that’s a good thing for every person who calls Atmore home.

Kudos goes toward those who helped organize the event, which went off without a hitch.

But we must not stop there.

We must stand with those who feel oppressed, and fight for them in our community and world.