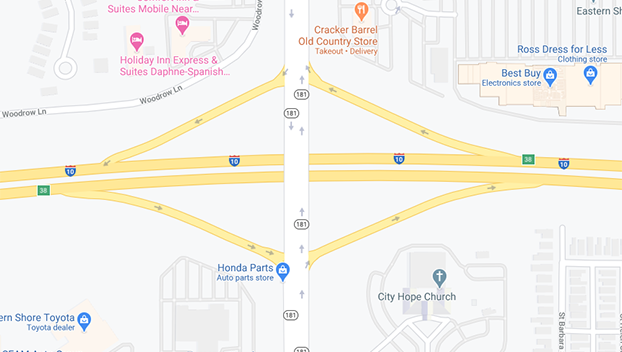 The Interstate 10 and State Route 181 interchange in Malbis will be closed beginning this Sun., June 28, at 9 p.m. to prepare for shifting traffic into the new diverging diamond configuration, according to the Alabama Department of Transportation.

Media and Community Relations Officer Katelyn Turner said in an email on Monday that the majority of the work to be performed during the interchange closure requires dry weather conditions.

Turner said ALDOT is closely monitory the weather forecast and will make the decision of whether or not to move forward with the closure by noon this Fri., June 26.

“Should the weather conditions not be conducive for the closure, it will be postponed to Sunday, July 12, beginning at 9 p.m. with the interchange opening back up by 5 a.m. Wednesday, July 15,” Turner said.

Turner said there will be no expected lane closures on U.S. Highway 90 or U.S. Highway 31 during the interchange closure as these are critical detour routes that will be utilized to facilitate the movement of traffic around the work zone.

The scope of the work includes closing State Route 181 north and southbound lanes between Eastern Shore Boulevard and Demetrios Boulevard, as well as the Interstate 10 entrance and exit ramps beginning at 9 p.m. Sunday, according to ALDOT.

Motorists will be able to exit or enter I-10 at SR-181 nor will they be able to cross the Interstate 10 overpass on State Route 181.

“The contractor crews will work 24 hours daily to perform striping and lane reconfigurations, barrier rail and guardrail installations, signage installation and modifications, and signalization of the interchange during this time in order to minimize the time of closure,” Turner said. “Motorists will be detoured at Exit 35, where they can use Highway 90 and Highway 31 to access State Route 181 and Interstate 10.”

Law enforcement officers and first responders will be on the scene to respond to any traffic accidents, according to ALDOT.

In the following weeks after the traffic shift, motorists can expect alternating lane closures throughout the work zone as the contractor places concrete islands, the final asphalt later and permanent striping, and completes the installation of permanent signals before the project is accepted as complete, Turner said.