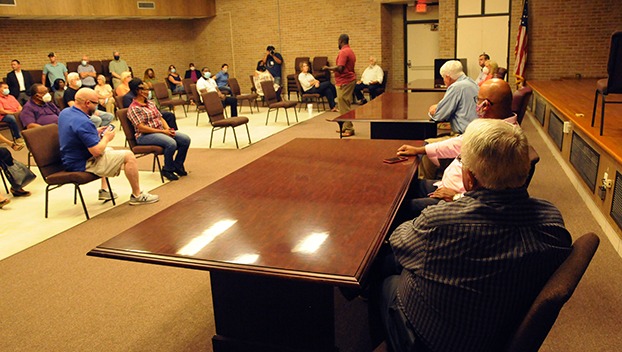 The path to understanding in Atmore is unfolding.

City and area pastors held a public meeting at Atmore City Hall on June 19, where citizens had the opportunity to ask city officials questions.

The questions centered around law enforcement, city maintenance, transparency and other topics as the city and country are finding a way to make racial equality a reality.

On May 25, George Floyd was killed by a Minneapolis police officer, and from there, protests sprang up around the country and world.

In Atmore, a peace march was held on June 6.

During the meeting last week, Mike Arnold served as the moderator.

Shree King asked Atmore Police Chief Chuck Brooks why the percentage of police patrol on one side of the railroad tracks is greater than the other.

“I get more complaints because there aren’t enough patrols,” Brooks said. “We have the city of Atmore broken down into five zones. We have an officer usually assigned to each zone. If there is a call or a complaint and an officer needs assistance in these calls, then we’ll have officers respond to those areas if needed.”

King also asked how the APD is engaging in the community to develop trust. Much was said during the meeting that many African American children, especially, are afraid of law enforcement officers.

“A few of my officers do, they go to the schools,” Brooks said. “They read to the children.”

Brooks added that he makes sure that officers are present during the school’s Dr. Seuss Week, Mayfest and Taste of the South, to name a few.

Additionally, Brooks said he brought up the idea of serving hotdogs to children to help establish that trust. Escambia County Sheriff Heath Jackson mentioned an opportunity of a similar sort during the first meeting.

King asked whether police officers can stop someone in the black community for just cause. She encouraged those who attended to report this if it’s happening to them.

“We patrol all throughout the city,” Brooks said. “One of thing big things going is that people are speeding, or people don’t have tags because of this COVID stuff. Does everybody need a ticket? I feel like the officer has good discretion. That’s their traffic stop. They decide to write the citations. That’s not up to me.”
Brooks added that it’s up to the officer’s discretion to pull somebody over, but if a citizen feels like they’re being harassed, then they need to report the complaint to him.

Brooks was asked by Russell Robinson whether or not a city advisory committee can be set up, and opening a dialogue with the youth of the city.

“People come in and move in and leave,” Brooks said. “You implement something one day, and it turns into a week, a week turns into a month and gets dissolved for some reason. I don’t mind an advisory committee. I’m very open to it. I’d like to look at some other cities our size and do some research on it.

“As far as open communication with our youth, I am going to be in the schools,” he said. “We’re constantly going into schools and reading to the kids. The sheriff has a bicycle program, and continues to be in school system and be available anytime.”

Brooks was asked by Sandra Gray why it takes a long time to arrest someone for a felony crime.

Brooks said the easy part is putting handcuffs on the individual. However, the hard part is collecting the evidence and making sure it’s right before going to trial.

Bernard Bishop encouraged the city to form a citizen advisory board committee to be able to open a dialogue between the citizens, city council and mayor.

King said this is only the beginning.

“It starts right there in the church,” King said. “At the end of the day, we’re going to fight and keep rebuilding until we can’t fight and rebuild anymore. This is not the end. Something has to give. This little town of Atmore is too small to have too much hate.

“It’s not ever going to stop,” she said. “It starts with our leaders.”