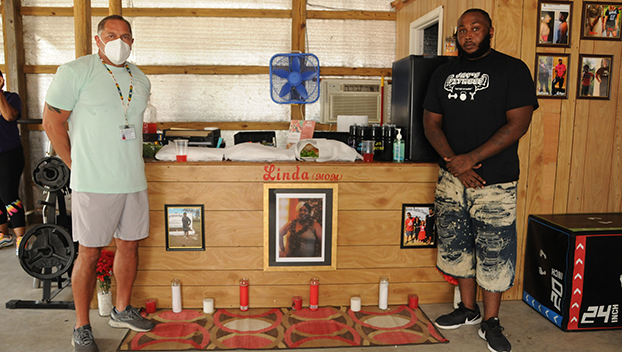 Shown are Eddie Jackson and Justin Brown standing on either side of a dedication toward Brown’s mother, Linda. | Andrew Garner/Atmore Advance

Justin Brown is trying to break a generation of unhealthy living.

The Atmore native is tkaing a good step in the right direction as he opened Jay’s Fitness, a crossfitting gym on Highway 21, near the casino.

Brown said his inspiration for opening the business was trying to break a generation of illness in his family.

“My mom (Linda) passed away from a heart attached, and my step-dad died from diabetes,” Brown said. “Basically, I’m trying to break a generation curse of unhealthy living. Plus, I was 420 pounds.

“I woke up one morning and figured it was time for a change,” he said.

Brown, who worked at Wind Creek Casino and Hotel, said it was time to get in shape.

“I worked at the casino, and got a trainer,” he said. “I came to him (Eddie Jackson) and asked him for help.

“He mentored me. That’s how this came about,” he said. “I owe a lot to him, and looking at my family’s past, I just wanted to break that generation of illness.”

Brown said his realization came three years ago, but he began training two years ago.

Brown said his regimen for getting in shape included cardio three days a week, and some strength training. He said he got up to working out seven days a week.

On his fitness gym, Brown said the gym has a wide range of workout opportunities from strength training and cardio.

On Jay’s Fitness’s Facebook page, there are several inspirational quotes.

Brown said just like Jackson inspired him, he wants to inpire others to get in shape.

“It cahnged my whole life,” Brown said. “I just had met him. The fact that he told me nothing but what was in my best interest, I took it to heart. I basically relied on his opinion. He never told me anything wrong. I basically threw myself on him. He taught me everything rrom fitness to nutrition.”

Brown added that group and couples rates are available.

Jay’s Fitness is open Monday through Friday from 6 a.m. until 6 p.m.; and 8 a.m. until noon on Saturday. The gym is closed on Sunday.

Brown said he built the gym for his mom.

“She died the day after Christmas,” he said. “When she passed, I thought I’m not playing anymore.”