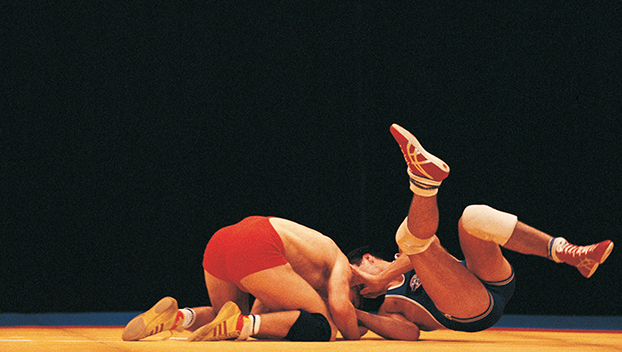 Two high school wrestlers grapple, go back and forth reacting to each other’s moves.

This typical scene during a wrestling match will be seen this fall as Escambia County begins its inaugural season of the sport.

Head coach Joel Gonzalez started wrestilng in eighth grade in Pennsylvania. He wrestled all the way through high school and ended up moving to Birmingham his senior year. He wrestled at Vestavia Hills.

“From there, I joined the military and worked on getting into the All-Army team, but got hurt,” Gonzalez said. “My coaching career started afterward at Berry Middle School.”

Gonzalez moved to Escambia County, Ala. and was an assistant wrestling coach at W.S. Neal.

Gonzalez said his philosophy is simple.

“Up north, we’re kind of a head-banger type (wrestling philosophy),” he said. “We’re going to out-muscle you, out-physical you and we’re going to beat you mentally.

“That’s kind of the philosphy I’m bringing to this,” he said. “I’ve had success with this at Berry. We’re just going to be bulldogs, and obviously techniques are going to be very important. We’re going to hurt your feelings.”

Gonzalez, who is serving as an assistant coach for the offensive line, said the players who are interested in wrestling are excited.

“We’ve got 30 kids signed up,” he said. “We’ve got all of our weight classes filled out, including a seventh grader filling out the 106 weight class.”

During a typical wrestling match, the beginning formalities are pretty much the same as in any other sport, Gonzalez said.

Captains come out and the referee talks about rules and what he’ll be looking for during the match, he said.

“They flip a coin, a green and red coin, or a disc,” Gonzalez said. “One calls the dcolor, and if you get the color, you pick odds and evens and shake hands and then the coaches decide on what weight class to start.

“The whole objective of it is to put them on their back and score,” he said.

Gonzalez said there are three periods at 2 minutes each.

“There is a point system,” he said. “Either you get pinned or you lose by points. There is more to that, too.”

Gonzalez said the point system is tied to how many matches the wrestler or team wins. He said a wrestling match is sort of like winning many battles in a war.

Gonzalez said he’d like to qualify three to four kids for state this year.

“The easy thing to say is to introduce the sport to the kids and have them like it,” he said. “However, I’m a competitor. I don’t want our tails to get kicked out there, and walk way from it saying we did a good job.

“Realistically pseaking I want to qualifiy three to four kids for state,” he said.

When asked why coaching, Gonzalez said he found that he gets more out of it than wrestling itself.

“I guess (I became a coach) when you can’t do it anymore and your body gives up on you,” Gonzalez said. “The military took a toll on my knees and my back. When I got out of the military, I went to Huntingdon college to wrestle. I told coach Smith I had a little bit left in me. I went out there. The mind was willing but the body needed a break.

“I was at peace with it because I fell in love with coaching,” he said. “Seeing a kid start and not know his left form his right, and all of a sudden hitting shots and taking someone down. That was more fun than getting my own hand raised.”