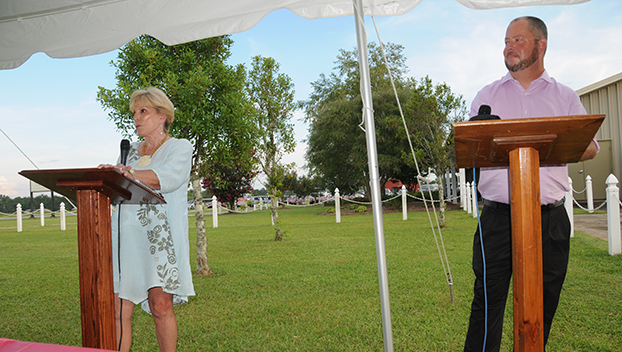 Susan Smith and Ernie Digmon participated in a mayoral candidate forum held by the Concerned Citizens of Atmore on July 18 at The Club.

The forum was moderated by Atmore Advance Content Manager Andrew Garner, and candidates were asked a number of questions. Each candidate had a certain time limit to answer each question.

Candidates were asked about their goals as mayor; duties of office; policies to promote social and racial justice; giving citizens a voice; and addressing challenges within the city.

“My goals are first to make sure our education system is where it needs to be,” Smith said. “We send $7 million to Brewton, Alabama and we have very little voice on how that is spent. We have elected officials who don’t hold our administrators accountable and that’s got to stop. We’ve got to hold them accountable. My other goal is to bring transparency.”

Smith added that she would like to change the length and time of the city council meetings.

Digmon said his first and foremost goal as mayor would be to improve the parks and recreation system.

“That would allow children and teenagers something to do,” Digmon said. “The parks and recreation system under my idea would encompass all of the downtown beautification plans, and create more jobs. I’m a strong supporter of increasing city employee pay.

“We lose good police officers because they go to a town next to us,” he said. “All of this goes along with training as well. First and foremost we need to have a place for adults and children to actually go rather than sitting there and playing video games instead of being in backyards.”

When asked about promoting social and racial justice, both said having activities for all and educating citizens about these communities are crucial.

“I believe all community activities should be geared toward everybody,” Smith said. “We have to do a better job getting out to the public what is happening and what they would be interested in. A lot of people get a voice. You as citizens need to say that I would like to see this happen, or that happen. Unless there is that communication between us as citizens, nothing’s going to change. It’s going to take every single one of you to help make this change that needs to come to Atmore. I’ve been here 35 years, and we’re still living in 1960.”

On facing challenges that are in the city, Smith said transparency needs to be addressed.

“There are a lot of things going on,” she said. “We’ve got to improve education, we’ve got to hold our board members accountable for what goes on. We’ve got to make sure safety is important to us. Our police officers are good officers, but a lot of them aren’t equipped with the necessary tools in order to get the job done.

“Unless you’re willing to go down there and say I saw so and so do this; it’s easy to pick up a phone say ‘so and so is doing drugs.’ I can’t say it enough. When you look at our town and see what’s going on in our town and who is involved and not involved, we’ve got to make a change. It’s just that simple.”

Digmon said it’s important to participate in assisting with law enforcement when a crime is being committed.

“People don’t want to speak,” he said. “To create a better town, it starts at home. Education starts at home. Discipline starts at home. Responsibility, and all other things begin at home. We need to come up with a way to provide parents with resources to allow them to have discipline.

“It’s not about us,” he said. “It starts with the kids. We need to focus on what is best for the children. That’s what I would do and I would do every possible thing for our children to have a brighter future.”