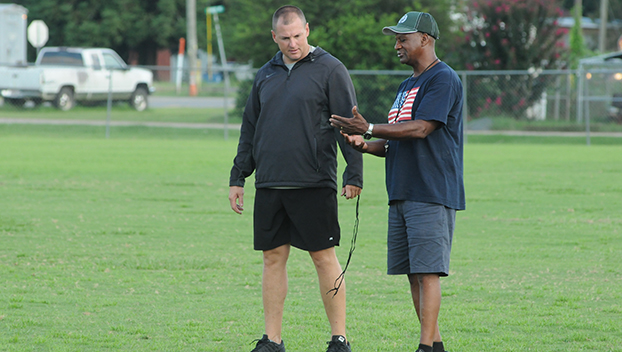 Willie White Jr. is back where he belongs – coaching basketball.

White was hired recently to be the new boys head basketball coach at Escambia Academy.

White worked some 27 years in education before retiring in 2004. His coaching stints include at Monroe County High School, J.F. Shields (for 13 years) and Excel.

The Monroeville native began his career at a junior high school in his home town.

The story of how he got into coaching involves being a pre-law major and graduating from the University of South Alabama.

“I was going to wait a while before I went to law school,” White said. “A teacher said since you want to work, go to the education department. After I got certified and deployed, I was hired in 1978. I started coaching and fell in love with it.”

“I played high school football and baseball,” he said. “I ran track,too. I went and played at Alabama Southern, and transferred from there and graduated from USA.”

White played under Coastal Carolina basketball coach Cliff Ellis, who was a former coach at Auburn and Clemson.

He said that’s when he fell in love with coaching.

After retiring in 2004, he went into the prison system, working there for eight years.

On how he came by the job at EA, White said he was coming down to Atmore about a month ago to do some prefab work at Esco Fab Inc. when he ran into Cougars running backs coach Marty Long.

“Me and another guy were talking about coaching, and Marty said they’re looking for a basketball coach,” White said. “I said, ‘Well OK, let’s talk.’ (EA headmaster) Coach (Hugh) Fountain called and the rest is history.”

White said this opportunity allows him to coach again, which was something he’s been wanting to do.

“This gives me a good chance to get my feet wet again, and see what I can do,” he said. “I tink it’s giong to be real good. I was always pretty successful.”

White’s coaching personality entails making the hardwood as close to a classroom-type of environment.