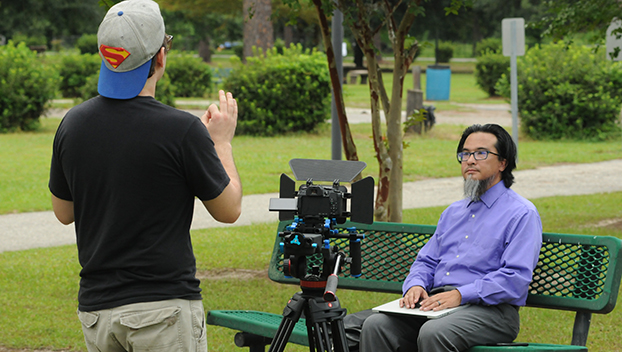 First-time film director Austin Swartzendruber gives instruction for a scene for one of the latest projects for Around the Reel on Aug. 15 at Tom Byrne Park.

Around the Reel was formed in May 2020, and is a community film company. The company’s vision is to help engage the community in something fun and entertaining in the film-making aspect, Owner and Founder Haley Grassia said.

“We do pride ourselves in being a Christian company,” Grassia said. “We do all kinds of genres. We stay away from the supernatural and accult stuff. We do a bunch of other genres.”

Anna Donald, head of production and design, said the company’s current project centers around a docuseries about filmmaking, and “who we are as a compnay.”

“Basically what we’re doing here is establishing who we are and how we make movies and what it’s like,” Haley Grassia said.

Haley Grassia said the company wants to work with other businesses to support them as well.

“We’re not in this for competition,” she said. “We want to partner with local businesses and highlight what they do, whether it’s through commercials, and to bring others together.”

Haley Grassia said Around the Reel was a part of the city’s recent Main Street Alabama designation here.

“We actually shot a lot of that (video submission) and we shot video for main street to get the grant to revitalize Atmore,” she said.