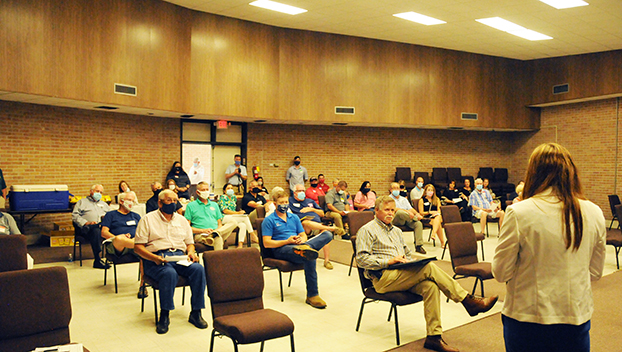 Atmore residents let their vision be known for downtown during a community visioning session at city hall on Sept. 1.

Additionally, economic development is a big part of the statewide organization’s efforts to revitalize downtowns and neighborhoods across the state.

“It’s important to us that the community be a part, and tell us what you want your downtown to be,” Mary Helmer Worth, Main Street Alabama state coordinator, said.

Jay Schlinsog of District Professionals Network of Franklin, Tenn., spoke about the economic vitality component of the process.

Schlinsog spoke about average median household incomes, and the economic imprint outside of the city.

Residents were then broken up into four groups for a brain storming session. Each group had to come up with three answers to the following four prompts:

• What are downtown’s top strengths and assets?

• Discuss and decide what downtown’s biggest weaknesses/problems are.

• Discuss and decide what goods and services you will find downtown.

• Discuss and decide what attractions and activities will there be in dowtown.

Each group called out discussion points, canceling out two of the same.

Then, each attending resident placed a sticker on what they chose from each prompt.

A public presentation, detailing what residents chose will be held tomorrow night from 5-7 at Atmore City Hall.

The Atmore Area Chamber of Commerce board of directors and corporate trustees announced today that Anna Norton has been named... read more