Atmore man charged with murder after body found in Nokomis

An Atmore man has been charged with murder after an unidentified human corpse was located in the Nokomis area, according to the Escambia County Sheriff’s Office. 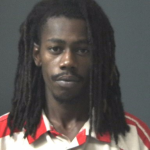 Sheriff Heath Jackson said in a release that De’Antae Deshay Knight, 23, was arrested and charged with murder I after investigators, along with crime scene technicians, processed the scene.

Jackson said on Sept. 3, ECSO investigators along with Atmore Police Department investigators responded to the Nokomis area in reference to a possible homicide.

“Investigators conducted interviews and executed numerous search warrants throughout the night,” Jackson said. “After an extensive search of numerous wooded areas, an unidentified human corpse was located hidden in the brush.”

Jackson said Knight is being held in the Escambia County Detention Center in Brewton on a $1 million bond.

“The identity of the deceased is unknown and will be released after identification is made by the Alabama Department of Forensic Sciences,” the sheriff said.

Jackson said the investigation is still ongoing, and anyone who has information is asked to call the ECSO at 251-809-0741.

“We would like to thank Klaas Kids for assisting us with their K-9 search teams and the Atmore Police Department,” Jackson said.