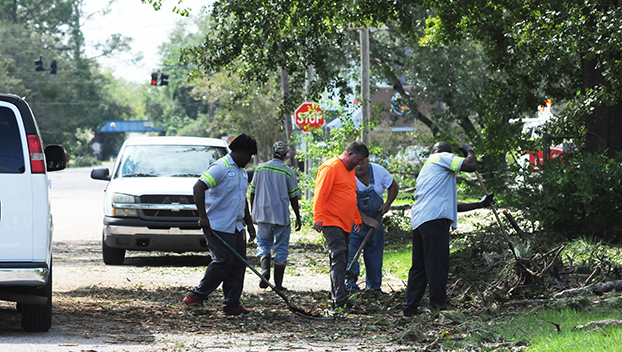 A collective effort between the city of Atmore’s fire, police and street departments, along with many citizens, helped provide aid and clean up during and after Hurricane Sally hit on Sept. 16.

Hurricane Sally made landfall in the early-morning hours of Sept. 16 with sustaining winds of more than 100 miles per hour. A slow-moving storm, the hurricane dumped buckets of water on Atmore, almost 10 inches, according to the National Weather Service. Winds also tore through the area, knocking down several trees and power lines.

Atmore Fire Chief Ronald Peebles said he believes well over 100 trees fell due to the storm.

“From Wednesday (Sept. 16) at 1 o’clock before the wind died down enough for us to get out, we cut up 46 that were in the roadway,” Peebles said. “(Strees and Sanitation Director) Calvin (Grace) had his crew out at the same time. The police department had their men cut up trees, too.”

No injuries were reported as a result of the hurricane, but Peebles said the police department completed some rescues.

Chief Chuck Brooks said during the storm, the APD delivered some gas to an individual whose mother was on a breathing machine.

“We did an extraction with a mother and her three small children on Liberty Street,” Brooks added. “The roof of their trailer came off, and we took them to a church.”

Brooks said several cars fell into ditches they helped get out. Additionally, he said some of the cars were pulled out by private citizens riding by.

“We cut up several trees,” he said. “With us and city fire department, we all pitched in and made sure trees were down and didn’t have power lines that weren’t in them.”

Brooks said they cut up the trees they could, and removed them from the roadway. He said he believes there were 150 trees the three departments dealt with during the storm’s aftermath.

Peebles said once the storm let up, all crews got straight to work.

“All three groups worked very hard and quick, and everything went well,” Peebles said. “It was a joint effort between everybody.”

Brooks said a lot of private individuals and citizens volunteered to help, and he extended his appreciation to them for their efforts.