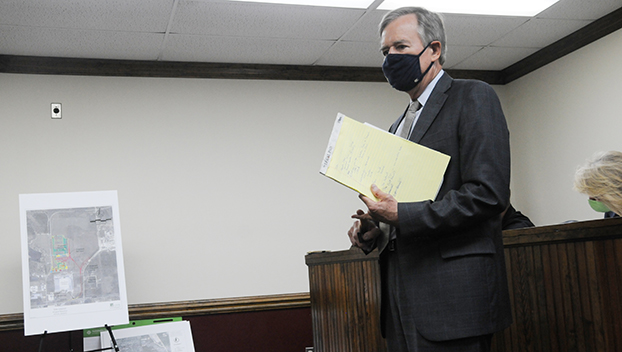 The Atmore City Council hosted a public explanation Sept. 28 on the peanut shelling facility that’ll be built in the industrial park.

Gov. Kay Ivey on Sept. 15 announced that Coastal Growers LLC is planning to build a peanut shelling plant in Atmore, making the Escambia County city into a hub for shelling in southwest Alabama.

Jess Nicholas, CEO of Centerfire Economic, who along with Mayor Jim Staff and members of the city council, helped bring Coastal Growers to the ciy, said the shelling facility is a consortion mostly of local farmers. He said there are between 110-120 farmers involved in the project, adding that there are farmers from North Escambia, Fla. as far as Sand Mountain in northeast Alabama.

“The reason the farmers like this particular way of doing business is that a farmer pulls peanuts out of the ground, but they have to have them shelled before they can be sold to Hersey’s, Jiff, M&M bars or whoever buys them,” Nicholas said. “The sheller shells the peanuts, and the sheller keeps 10 percent of the profit. The plant will allow them to capture an extra 10-20 percent profit and keep it in house. They’ll own their own shelling.”

With Coastal Growers coming to Atmore, Escambia County will be churning out between 40-50 percent of the peanuts shelled in the state, Nicholas said.

City Attorney Larry Wettermark introduced the public explanation, and a short video explaing the process of peanut farming from field to processing was shown. Nicholas also pivoted to a video explaining the company that constructed a peanut shelling facility out of Donalsonville, Ga. The construction company is LMC.

Wettermark said the council will be voting on five separate project agreements during its next-scheduled meeting. The meeting on Monday served as an explanation for the projects, he said.

The agreements include a committment by Coastal, which has a stake in a buying adventure in the running of the plant; and a project agreement that includes the city offering land to the company for the processing plant, Wettermark said.

The plant itself will be constructed on two parcels of land totalling 84 acres in the industrial park, Wettermark said. The city is donating one parcel, selling another and purchasing a portion of another parcel.

“We have also given Coastal an option to expand,” Wettermark said, adding that they are thinking about placing a blanching facility on site.

Wettermark said another parcel is being reserved as a right of first refusal, or the city has the option to sell the land to the company if another wants to come in and may be harmful to the peanut product.

Another part of the agreement is the city purchasing land from Swift Lumber, which will pave the way for a transload facility. The transload facility will help service industries around Atmore, including bringing product to the Port of Mobile via rail.

The last thing the city is offering are tax abatements, which last for 10 years, Wettermark said.

Nicholas broke down some of the numbers that will help benefit not only Atmore, but Escambia County.

“Wheras some of the other industry sectors have had problems (because of the COVID-19 pandemic) including aerospace and a lot of entertainment industries shut down a little bit,” he said. “Peanuts don’t stop coming out of the ground.”

Nicholas said with the abatements over the first 10 years, the state of Alabama – which gained its projections for the project from the state department of revenue – intends to collect $408,479 in ad valorem taxes for the state school system. The county will collect $2.3M for its school system after 10 years, he said.

Nicholas said once the abatement process ends, over the second 10 years, the state will collect approximately $665,000 in ad valorem for state education, and the county will collect $2.9M.

Nicholas said over a 20-year stretch, $3.5M of tax revenue will be put into the education system on a local level, adding that it doesn’t include money flowing back into the city and county general fund.

Overall, the impact the facility will bring over 20 years is $80M, he said. Some $33M will go toward the local economy, and $12M will be reserved for compensation.

“This is a really exciting project,” Nicholas said. “It checks off all of the boxes. It provides stable, good jobs that pay well.”

• approved library board appointments; and,

• Staff said FEMA will be picking up all vegetation that’s by the road beginning soon. He said all vegetation must be separate from other trash items or it won’t be picked up.