TS Delta to strengthen into hurricane 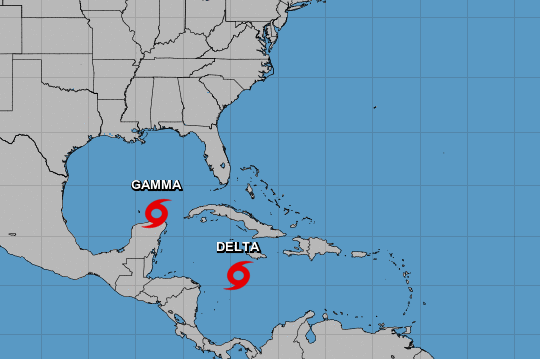 Shown is a screenshot of TS Delta just below the Gulf Coast. Also shown is Gamma.

Escambia County EMA Director David Adams said today it is still early in the forecast to determine local impacts, but early indications are that we can see some effects from Tropical Storm Delta.

Adams said TS Delta is forecast to strengthen into a hurricane and make landfall in the northern Gulf Coast late this week.

“As we know well from Sally, the forecast can and often does, change,” Adams said. “Please make preparations now and restock any supplies that you may have used during Hurricane Sally.”

“We’ve been cautioning that the average track error at this point is 160 miles and 200 miles later on in the forecast, and this results in the forecast cone of uncertainty encompassing our entire area (southeast Mississippi, southwest and south central Alabama and the western Florida panhandle),” NOAA’s Dave Eversole said.

Eversole said in an email that the NWS doesn’t have sufficient information to say how much surge we may get with Delta, but “the highest tides/potential surge will likely be Friday night into Saturday morning.”

“As far as rain goes, we see it starting on Thursday with the heaviest rains Friday into Saturday,” he said.

Eversole said rainfall totals for the Alabama coastal area look to be around 6 inches with locally higher amounts possible.