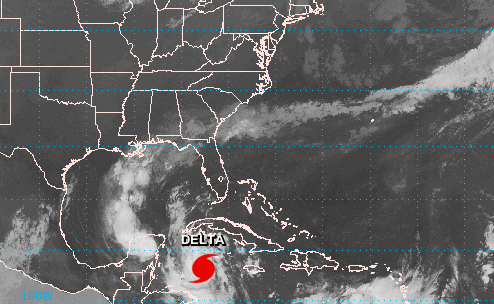 Delta, a storm that gained intensity early Tuesday, continued to rapidly strengthen and is categorized as a major hurricane, according to the National Weather Service.

Prior to landfall in Louisiana, there will be some weakening, but Delta is slated to be a significant and dangerous hurricane.

According to the NWS, even if Delta makes landfall west of the area, coastal areas are expected to be impacted by the storm surge. The storm is forecast to turn north and northeast prior to landfall, but when the turn occurs will determine the extent of local impacts.

Additionally, there is also a possibility of tropical storm force winds, especially along southwest Alabama and southeast Mississippi, according to the NWS.

“The outer rain bands of Delta will also bring the potential for locally heavy rain and tornadoes,” NWS officials said.

According to the NWS’s latest update, the storm timing has slowed down some and it is looking more likely to be a Friday night/Saturday event.

According to the NWS, the expected storm rainfall is between 3-5 inches possibly. Rain is expected to begin on Thursday with the heaviest rain most likely into Saturday.

Delta strengthened into a Category 4 hurricane early Tuesday morning, according to the National Weather Service.

According to data from the NOAA Hurricane Hunter aircraft, Delta is continuing to rapidly strengthen. The maximum winds have increased to near 130 miles per hour with higher gusts.