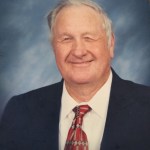 The family moved to Bratt, Fla., where he attended school. At the age of 19, he went into the Navy.

He was in World War II while serving aboard U.S.S. Mugford along with three other ships. During this time, his oldest brother was serving on another ship. He played basketball with the Amphibious Force and the U.S. Atlantic Fleet Team. They received several awards and medals. After serving 20 years, he began working for the Norfolk Navy Yard. He received many awards from the mayor of Virginia Beach for his service to the group delivering medical supplies and food to the shut-ins.

He met his wife, Thelma, and shared over 44 years together. He loved fishing and enjoyed time with his family, especially at the Bratt reunions.

He is preceded in death by his wife, Thelma; his parents, Lawrence and Dollie Amerson; 12 of his siblings; and his maternal and paternal grandparents.

For the safety of you and others, please practice social distancing requirements, though wearing a facial mask is strongly encouraged.