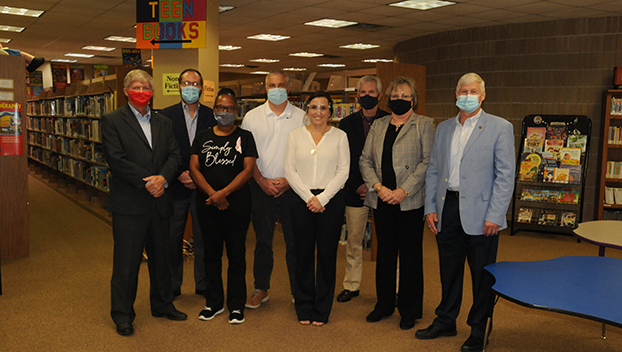 The Alabama Supercomputer Authority (ASA) held a legislator meet and greet at the public libraries in Atmore and Brewton on Oct. 19.

The ASA was created in 1988 with a focus in high-performance computing. Some 25 years ago, the ASA was integrated to become the statewide network in place for school systems.

ASA CEO Walter Overby said during the meet and greet that they created the Alabama Research and Education Network.

“This is in all of 67 counties,” Overby said. “We have 95 percent of school systems on the network.”

Overby said the ASA’s role is to service the schools that need it the most.

Additionally, the ASA services colleges and universities, along with 177 libraries across the state.

“The thing I love about our network is that it’s a niche and we feel like we do it well,” he said, adding that the ASA monitors the network 24/7.

“We appreciate the library system,” Albritton said. “We appreciate all that you do for the communities for education and the way you tie into the schools and the poeple, whether it be workforce or education or research.

“This is y’all’s money,” he said. “All we’re doing is appropriating and trying to direct it to the most appropriate places that it can be used for.”

Albritton said one of the problems is the availability of Internet service reaching to a lot of homes. He said the legislature is going to be working with the ASA to find a solution.

Baker said the ASA’s role is important and all should know how much it impacts communities.

“The taxpayer dollars are redirected back into the community and it draws support in the community,” Baker said. “You made reference to serval things for FEMA assistance. This provides that outlet support for them.”

Baker added that he’s excited about the expansion of broadband connectivity into the parking lot at APL.

APL Director Hope Lassiter said she appreciates all Baker and Albritton have done through various donations and their work with the ASA.

“The impact that the ASA and our new Internet has had on this library has been huge,” Lassiter said. “Over the last two weeks, or 12 days, we have assisted 350 people on computers and sent 700 faxes. This goes to show that libraries, especially Atmore Public Library, is in need.”