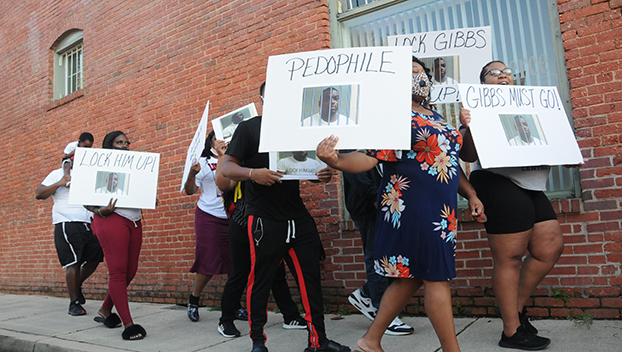 “Lock Gibbs up! Gibbs must go! Save our children!”

That’s what a group of peaceful protesters were declaring Oct. 15 in downtown Atmore to take a stand against sexual abuse and an area pastor who has been indicted on sodomy charges.

Christina McCaskill, who led the march and whose son came forward with the allegations against Pastor Garyl Gibbs, said the pastor is a leader of seven churches.

“Basically what happened, he has this group of – he calls them the revival team – or his arm bearers and they travel with him pretty much all over the U.S.”

“My son was a victim, and he came out first and stood against him,” she said.

In fact, Gibbs – who is pastor of Call to Life Apostolic Church Ministries in Monroeville and a church in Atmore – was indicted on three counts of sodomy, according to reports. Gibbs was then charged with an additional six counts of sodomy by the Monroe County Sheriff’s Office.

“He has sodomy charges in Escambia County and also in Monroe County,” she said. “The reason we organized this march is because there are still teenage boys going to that church (Call to Life Apostolic Church Ministries), and their parents are refusing to allow them to be questioned by the police, (district attorney) or anybody.”

McCaskill said the church, which she’s no longer a member, is defending Gibbs, and scandalizing the victims.

“Basically, what we’re doing is not only against Gibbs, but we’re taking a stand against sexual abuse,” she said. “We were members of that church for over 20 years. We did come to find out he was sexually assaulting young men from the time he joined the ministry.

“It is hard to believe because he is a dynamic preacher. I can say that,” she said. “He can prophesize your eye balls out, but at the end of the day, you’re violating young men and we won’t stand for it.”