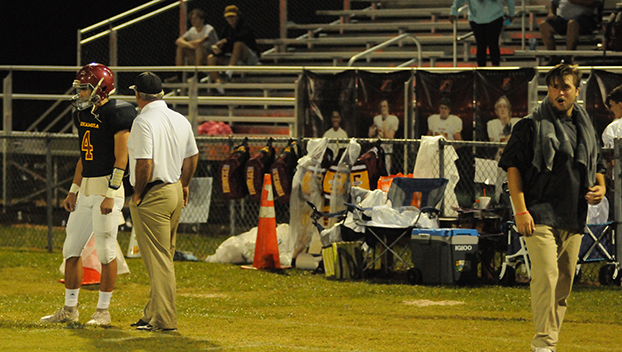 Between four to five months each fall, it’s like Christmas for the Fields family.

This fall has been a special time so far for John, Josh and Sam as the trio have been on the same sideline with different roles at Escambia Academy.

John (father) is EA’s defensive line coach; Josh is the linebackers coach; and Sam plays linebacker and wide receiver for the Cougars.

“We all love football,” Sam, the youngest of three, said. “We all grew up playing the game. We’re all big Alabama fans. My brother played here, and my dad was a (Alabama) state trooper adn began volunteering here. That really helped us all spend more time together.”

Josh said each one of them have their own interests, but the one similarity is football.

“All of us are out spoken and like our own thing,” Josh said. “The one common bond between the four of us is football.”

Josh added that his father played football, and set reocrds at Flomaton. He said his older brother (Jacob) was first one to come and play at EA.

John said football Fridays and Saturdays in the fall have been special. While Josh was playing football at Huntingdon on Saturdays, the family would go and watch him in the afternoons and then they’d all get together and watch Alabama football games. All of this was done, of course, after Friday night football games.

“We live for it,” John said. “It’s like four or five months of Christmas for us. Every weekend is very special. We’ve been doing this since the 1990s with our kids.

John began coaching back in the 1990s in Bibb County, where he served as a state trooper. In fact, John was one of the state troopers who escorted former University of Alabama head football coach Gene Stallings.

“When I got here, I got into coaching when Jimmy Dean came by the house to see if Jacob, my oldest, would play peewee football,” he said. “Dean asked me if he could ask Jacob, and then asked me well, ‘if he plays, will you help coach?’

“In 1996, I started coaching Jacob, and then Josh came along,” he said. “They have never complaineed about playing time. They have never asked to be the quarterback. Whatever position they were given, that’s what they played. It worked out real well.”

Josh said at first it was a little awkward coaching, especially with the kids, but it got better.

“The big thing was at first establishing (authority), ‘Look I know y’all know me and saw me coming around goofing and joking with me. You see, I don’t mind all of that, but I’m the coach now. Whenever you graduate we can be buddies again, but right now, I’m not your friend.’

“Sometimes I struggle with that, but it’s helped establish me as a coach so far,” he said. “The kids are all driving with one goal. They understand what they neeed to acomplish.”

Sam said he’s used to his father coaching, but admitted it’s been different having Josh as not only his coach, but his teacher. Josh is teaching history and literature at EA.

“For my boys, it’s been a thrill,” John said. “They’re so easy to coach. They never complain. They always do the right thing. I’ve always taught them to work hard, don’t expect anybody to give you anything. Because it’s not going to help them out later on when I’m not around.”

Having family on the sideline can lead to fun moments.

“Around the house, he’s kind of goofy,” Josh said. “He’s my little brother. Me and my older brother would always bully him. He’s always been a good football player.

“This year, he’s gotten so much better by leaps and bound,” he said. “I think he’s an extremely hard worker. I think he’s been hungry, and to see him lock in during a game is great. He goes from a goofy brother to almost like a machine. Plus seeing Sam haul in a couple of touchdown passes has been nice, too.”

Sam said it’s been a great year so far.

“Right off the bat, Presbyterian was a fun game and we’re carrying all of that this season,” he said. “I think we’re hitting our stride and hoping to carry that all the way to the state championship.”

John said it’s the small moments that really have been fun, namely after Sam makes plays on the gridiron.

“I guess when he (Sam) comes off the field sometimes he comes over and he just gives me that look and a knod,” John said. “When he does something good and that smile on his face.

“There are moments of him coming off the field and being with his brother, coaching him on the sideline and telling him what to do,” he said. “Those moments are special. It’s kind of like I’m passing the torch to Josh.”

The three will be together once again on the sideline this Friday as the Cougars host Macon-East in in the AISA Class 2A state semifinals.

The Atmore City Council approved a more than $12 million 2020-21 operating budget at its regular meeting on Nov. 9.... read more