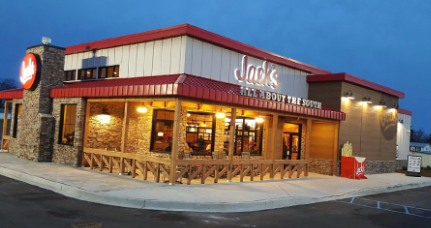 The Atmore City Council adopted a resolution to enter into a project development with Jack’s Family Restaurants at its meeting on Nov. 23.

The agreement, which includes tax abatements for the forthcoming restaurant, solidifies that Jack’s would rebate one-half of the new sales tax it creates, City Attorney Larry Wettermark said.

Wettermark said the agreement also includes the improvement of public right of way and streets where the restaurant will be located, near Avenue B right across from Walmart.

The council consented to consider it on first reading, and the adopted resolution 2020-31, giving the city the authorization to enter into the agreement.

• adopted resolution 2020-32, awarding a construction contract for the landfill cell construction to Grady Rall’s and Sons for $281,000;

• approved ordinance 07-2020, amending the zoning map rezoning specific parcels on Cindebran Drive from their current B-2 General Business classification to R-1 Low Density Residential; and rezones specific parcels on Whippoorwill Lane, Bob White Drive, Rockaway Creek Road and Fillmore Drive from their R-2 Medium Density Residential classification to R-1 Low Density Residental. This amendement invovles 16 properties, starting as a subdivision on Cindebran, Building Inspector Chris Black said during a Nov. 9 workshop. Black said some of the properties were classified as either R-1 or R-2, and by rezoning the properties, it would put them all under the R-1 classification; and,

• heard a complaint from Vin-Tiques Owner Sandy Helton about a business located on West Ridgeley Street, just down from his business.

Helton said the purpose of his complaint is to address the growing concerns about issues surround the special events venue that has opened in the building previously owned by Country Charms.

“Over the past several weeks it has beceome increasingly difficult to predict or prepare for the late night parties there occuring at the facility,” Helton said. “While there have been several events that have taken place at the venue withiout incident, the activities of the after-hours parties are of concern.”

Helton said two weeks ago, we (Helton and Scott Benton) arrived on a Saturday morning to open our shop only to find broken beer bottles, cigar blunts and trash outside of our front entrance.

“Our door was urinated on and the smell was quite awful,” he said.

Helton said they desire for every business in Atmore to survive during a challenging time, and “this activity simply can’t continue.”

“We have made an attempt to communicate with the business owner, and we were met with belligerence and an uncooperative attitude,” he said. “I’d be interested in knowning that if the building is permitted by the city and fire department to host such large events.

“If so, is that a matter of public record?” he said. “If so, does the building have bathrooms to accomodate such large crowds.”

Helton concluded by asking the city council and other departments take a closer look at the venue.