Carlton Prescott Sharpless, 94, passed away on Nov. 22, 2020. He was born on July 18, 1926 in Atmore to the late Jackson Lafayette and Thelma Viola Bratcher Sharpless. 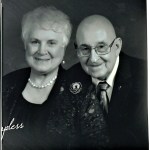 Carlton Sharpless is shown at right.

He served in the United States Army.

He is preceded in death by his parents; his wife, Audene Mothershed Sharpless; his sisters, Waldine Sharpless Argroves and Joyce Sharpless Hogg.

A funeral service will be held this Sat., Nov. 28, 2020, at 11 a.m. at Brooks Memorial Baptist Church with Dr. Dale Patterson and Dr. Tim Tew officiating. Interment will follow at Oak Hill Cemetery in Atmore.

Visitation will be Nov. 28, 2020 from 10 a.m. until service time at Brooks Memorial Baptist Church.

For the safety of you and others, please practice social distancing requirements, though wearing a facial mask is strongly encouraged.